Walk Like a Sloth introduces students to functional bone anatomy using plastic replica bones (traveling trunk available from the UI Museum of Natural History) from a family-group of ice age ground sloths discovered near Shenandoah, Iowa in 2000. Ground sloth bones are truly strange inside and out (more on that subject later), but despite all of their peculiarities some bear a remarkable resemblance to human bones, only much larger.  Walk Like a Sloth explores the hypothesis that a possible reason for this similarity, besides sharing a common 80-odd million year-old ancestor, is that like humans, Megalonyx (along with some other ground sloths) evolved to walk upright on two legs.

Bipedal walking might seem a relatively easy feat, merely a matter of balance and positive thinking, after all trained circus animals from dogs to elephants manage it. But, they do so only briefly and with great expenditure of energy.  Walking routinely and efficiently on two legs for extended periods demands literally a top-down, head-to-toe evolutionary reengineering of a quadruped’s skeleton.  Why did only a few primates and some ground sloths of all the mammal species that have lived on Earth manage it?   A dozen surviving fossil trackways leave no doubt.  Unfortunately, no fossil trails have ever been found of Jefferson’s sloth so we are left with only their bones to answer to the question, “Could Megalonyx jeffersonii walk upright too?”

Walk Like a Sloth is divided into 10 chapters, each offering lessons on a different bone and following the same basic format.   With a little basic sloth bone anatomy under their belts creative teachers, naturalists, scout leaders, etc., will find a myriad ways of using the sloth traveling trunk.  We hope you’ll share your ideas and discoveries with us so we can share them with others.   Was Jefferson’s sloth a biped?  Scientists don’t know for sure.  Learners are encouraged to judge the evidence and make up their own minds.  Perhaps one day a user of the UIMNH traveling trunk will find the proof.

Sloth bones are truly strange inside and out.  Inside, they are virtually unique in the animal kingdom in the absence of any marrow cavity within their long bones.  Instead of marrow, the bones are filled with a honeycomb network of bony struts and braces called trabecular or cancellous bone.  This gave the bones great strength without the cost of extra weight.  Whether that was necessary because of sloths’ weight, an unusually active life-style or just an accident of evolution is unknown.

Outside, sloths are a study in contradictions and questions:

The bones themselves are often strangely shaped. . . recognizable as upper legs, back bones, etc. but odd in weird ways.  It is almost a rule of thumb among the paleontologists who identify bones: if you can’t immediately figure out what is–think about sloths. The important point to remember is sloth bones don’t look like sloth bones solely or principally because of the sloths’ genes.  Bones grow the shapes they do in response to the forces and stresses placed on them while they’re developing, that is: gravity, muscles pulling, movements, etc.   In other words, sloth bones look like sloth bones because they grow inside an animal doing sloth things.  And one of the most significant and characteristic things some ground sloths did was walk upright.

How and why humans separated themselves from the other primates and began striding confidently on two legs is a question mankind has asked for thousands of years.  Many scientists consider it the single characteristic that put us on the evolutionary path to becoming tool-users and uniquely human.  So it was with no little surprise that scientists realized 100 years ago that some ground sloths probably could walk upright also.  Why do they do it?  What advantage is there that all the rest of the mammals have overlooked?  Perhaps the answer can be found by considering the theories of why our human ancestors started walking upright.

Few ideas in anthropology spark more disagreement than the different theories of why and how the human species evolved to stride bipedally.

No one thinks sloths were the efficient striders that humans became, but no one believes our primate ancestors dropped out of the trees and started walking like a Parisian models right away either.  Whatever benefits our ancestors reaped from standing upright,

they started millions of years ago and just improved from there, keeping us on the evolutionary path of efficient striding.  Studying ground sloths and if and how Megalonyx became bipedal may some day produce  new insights into our own evolution.   Perhaps it wasn’t about heat regulation at all or feeding more efficiently or seeing predators for sloths or humans. . . . Maybe we could just see the horizon better from up there or the stars.  All I know is the world is a lonelier emptier place without sloths to walk with. 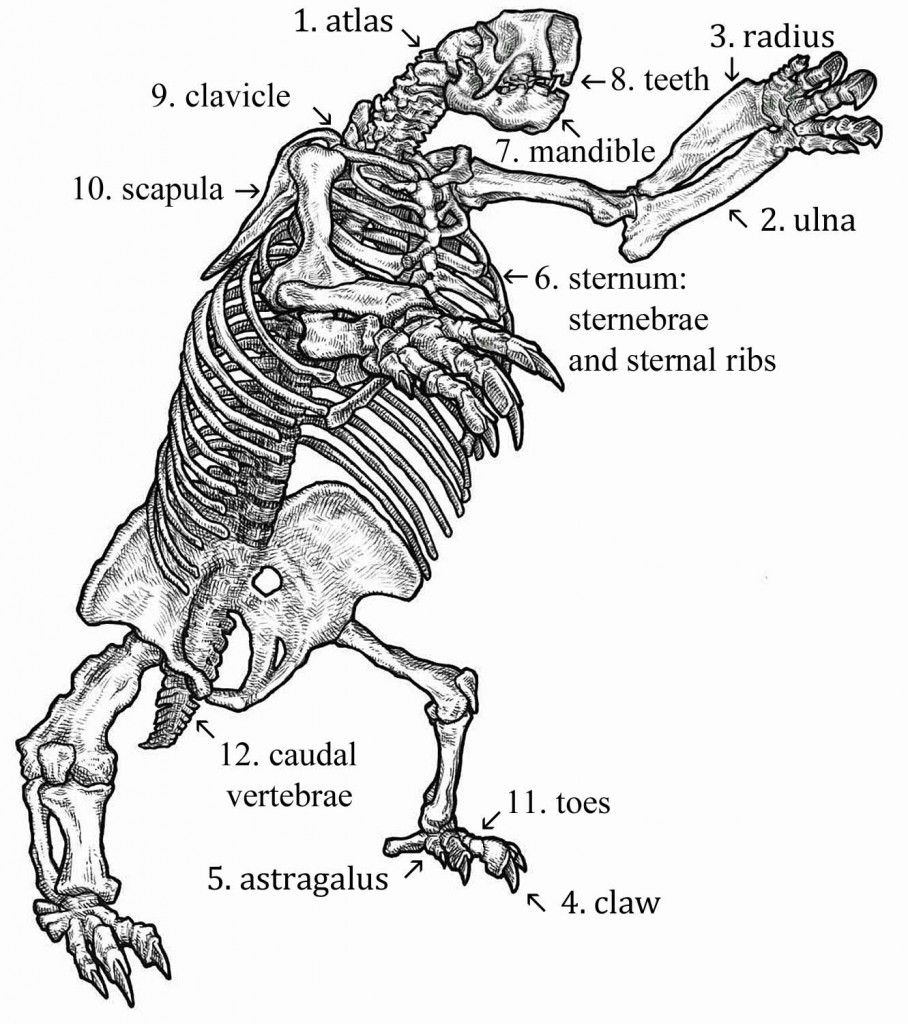 1 thought on “Walk Like a Sloth: lessons in ground sloth locomotion”