The clavicle or collar bone connects the scapula or shoulder blade to the sternum or breast bone. Along with the scapula and proximal end of the humerus (upper arm bone) the clavicle makes up the sloth’s so-called shoulder girdle and plays an essential role in helping control the sloth’s arm movements. The larger rounder end of the clavicle connects to the manubrium of the sternum while the smaller thinner end connects to the acromion of the scapula. Both ends are rough and pitted, not smooth as on other joints, serving to better anchor important ligaments within the shoulder girdle. These are synovial joints–in life you would find a cartilage pad between the bones and a layer of fluid to lubricate and cushion the shocks these joints must absorb.

Like your clavicle, the sloth’s collar bone is curved slightly to wrap around the front of the chest (bow side out) and attach to the scapula. Your clavicle bends forward slightly again, making an “S” shape, Megalonyx’s doesn’t, but there is great variability in shape among humans as well as sloths. (Aiello and Dean, 1990)  With the medial or “in” side versus the lateral or “out” side determined, we just need to identify the top or superior side from the inferior side or “bottom.” Look for the cone-shaped  conoid tubercle about 1/3 of the way from the thinner (acromial) end. That goes “down.”  It anchors a ligament that attaches the clavicle to the coracoid process of the scapula.  Note the anterior expansion of the clavicle at the lateral end.  That’s extra surface area for attaching part of the deltoid muscle. 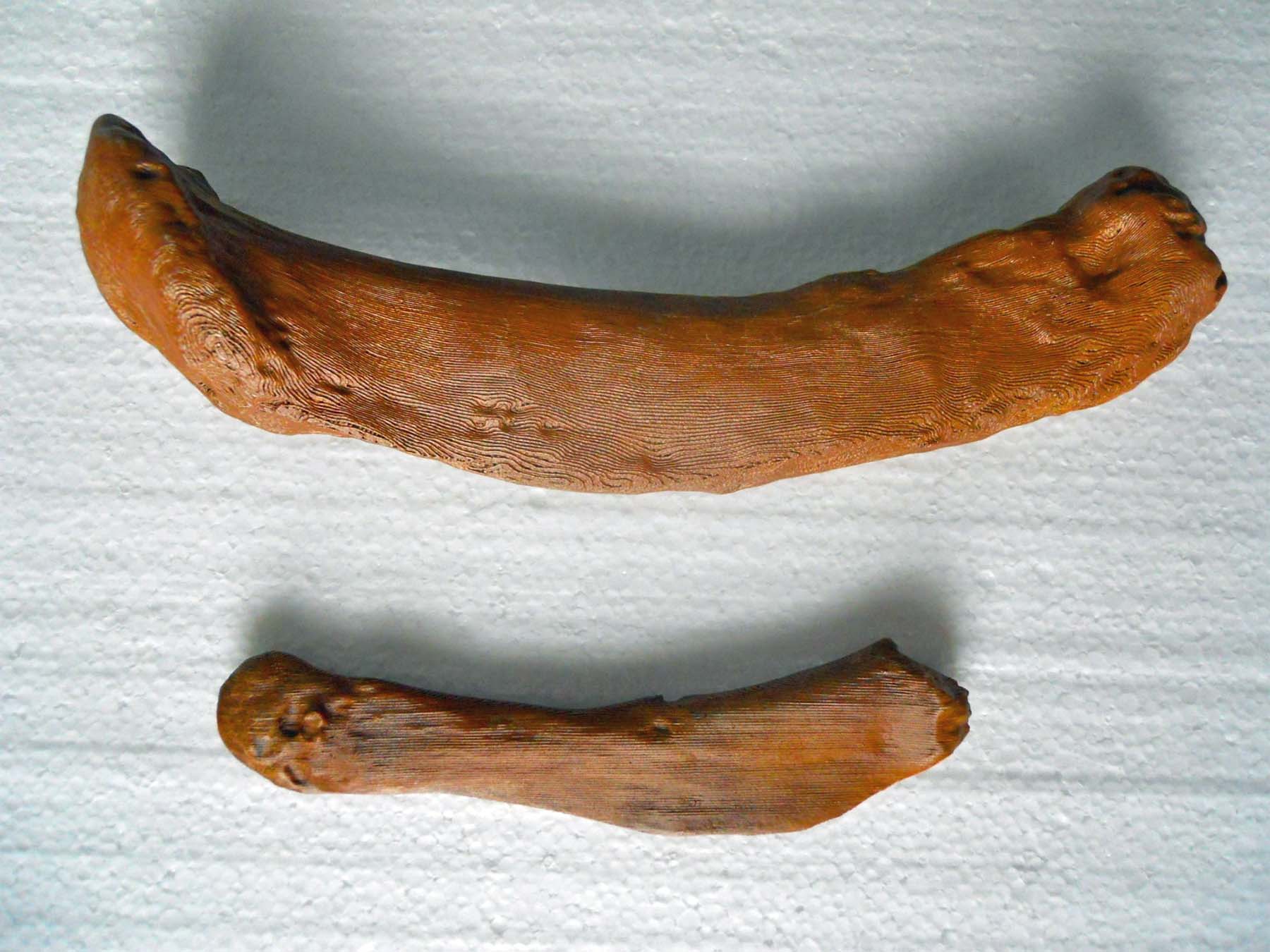 #1 Well-anchored shoulders are essential in mammals with certain lifeways, so early sloth scientists believed the clavicles could provide important clues about how sloths lived.  Different theories were hotly debated.  Clavicles are essential in flying mammals (e.g. bats) to stabilize the shoulder, but sloth didn’t fly.  Swimming places similar demands on the arm and sloths have been discovered in Peru that lived like seals, grazing on algae on the sea floor. (Muizon and McDonald, 1995)  However, Megalonyx lacks their other aquatic adaptations.  Clavicles also are common in burrowing mammals–rodents and armadillos, for example, but not all diggers have them (dogs for example); besides, Megalonyx lacks a proper elbow for digging (see ulna lesson).  Many climbers have clavicles, including primates, but how much time would ground sloths have to spend in trees?  What does Megalonyx do that demands such high shoulder stability?  The answer may be because they walked on two legs, freeing arms and paws for other tasks.

Clavicles work like the struts on a car, which lend flexible stability and support to keep the vehicle under control while it’s moving.  Without struts a car would be very hard to drive, threating to bounce out of control every time it hit a bump.  Bipeds need extra control too–they swing their arms when they walk, twisting their upper bodies to maintain their balance and keep their centers of gravity over the foot they are putting down.  Rotating the spine with the arm swing allows bipeds to take a longer step and walk more efficiently, covering the same distance in less time.  (Try it. Try running with your hands in your pockets!)  We could swing our arms and keep our balance without clavicles, but our arms and shoulders are heavy and we would have to use a lot more energy stopping our shoulders from making the large unstable oscillations that would occur without clavicle struts. (Hildebrand, 1985)

#3 The tiny lines visible in the prototypes are a product of the 3-D printing machine used to fabricate the prototypes.  There real bones are smooth.

Clavicle comes from the Latin word clavis meaning “key.” Roman keys were “S” shaped, as are the human bones. (Aiello and Dean, 1990)

In ground sloths, as in humans, the clavicle is the only bone attaching the arm (via the scapula) to the torso.  Many animals don’t have clavicles at all (e.g. horses and bison).  In others the clavicle is rudimentary, just “floating” between the scapula and breast bone (e.g. cats).  Their so-called floating shoulders are connected to their torsos with just muscles and ligaments giving their front limbs extra dexterity and lengthening their stride when running.

Feel your collar bone You can feel the entire bone; it’s well exposed–it needs to be to improve leverage for some of the muscles you use to lift your arms sideways (like when you do “jumping jacks”).  Firmly wedged between the shoulder and breast bone, clavicles are apt to snap when you use your arms to break a fall–not an uncommon accident for species that walk upright!  Consequently, broken collar bones are high on the list of frequently fractured bones in humans.

Find the far outside end of your clavicle; now lift your arm laterally and make 1/2 a “T.”  Keep feeling as you lift your arm straight overhead.  Can you feel the clavicle lifting and turning?  It rotates about 40°.  That’s the reason for the curve in the bone–it keeps it in contact with the scapula while the latter rotates, rather than stretching the ligaments, maintaining a tight, stable, bone-to-bone fit.

Walk like a zombie Movie-makers know one way to show a character as a monster or space alien is to have it walk with an unnatural  gait. We aren’t aware we twist our spines when we swing our arms until we see someone waking stiffly without twisting.  Practice walking naturally paying attention to your shoulders.  No try walking without swinging your arms. . . does it feel natural?  Try taking extra long steps—can you feel your shoulders twisting more?

Can you take those long steps without twisting? Freeze balanced on one foot.  Notice your shoulders and which direction they are turned.  Can you turn them in any other direction without losing your balance?. . . Not without shifting your weight in some other way.   Now try walking like a zombie with no twisting at all.

Oh no!  Someone has extracted your clavicles!  Look around to make sure you have plenty of room and try to walk in a straight line while you make extra-wide swings with your arms and shoulders.  It’s a lot harder and you have to use a lot of extra energy to stay straight and balanced!

Math Fun 1 We don’t have a lot of sloth bones that we can use to compare the adult with a juvenile directly, but here’s one.   Compare the adult and toddler clavicles.  Could we use them to estimate the animals’ relative sizes?  Which dimension would be the best indicator?  Should we compare the clavicles’ lengths?  Diameters?   Something else?  Defend your answer.   Assume the adult clavicle comes from an animal weighing 2,800 pounds.  How much do you estimate the toddler weighed? Compare your answers to the weight you calculated using the shoulder blades (see scapula lesson).  [Generally clavicles have proven to be very poor for estimating weight for humans, especially for juveniles. The bone doesn’t bear any weight directly and grows in response to other forces (e.g. arm-use, right vs. left-handedness, upper body strength (which is usually different for boys vs. girls), occupation, sports and other activities.]

Math Fun 2 Clavicles provide better estimates for stature, that is,  height–not as good as arm and leg bones, but much better than fingers and toes– but only for specific populations.  Just for fun, try a formula we could use if we knew the sloths had grown up in the state of Punjab, India sixty (60) years ago:

How tall was the adult?  The juvenile?

[The adult clavicle is about 10 in. long (measured on a straight line rather than following the curve).   So an Indian sloth would have stood about 9 ft. 3 in. tall ± 2 inches.   Compare that to the estimates you got from other bones (see ulna lesson and radius lesson).  Surprisingly close actually and also close to the estimate De Toledo (1996) made for the length of the skeleton.  The juvenile clavicle is about 6 1/4 in . long, which translates to an estimated height of 5 ft. 9 in. ±  2 for junior, sahib.]

of the deltoid muscle, which helps abduct your arm, that is, pull it up sideways, as when you do a “jumping jack.” Lift your arm.  Can you feel the mass of muscle at the top of your shoulder working?  The deltoid makes up most of that muscle mass.    The other part of the deltoid is anchored to the acromion and scapula blade (see scapula lesson).  Reach around and feel that working too.  Sloths probably weren’t doing jumping jacks but they were getting plenty of exercise lifting their arms overhead to rip down tree branches.  Mimic that with your arm.  Feel those deltoids working!

The clavicle is the first bone in humans to start fusing—usually beginning about the fifth week after birth. (Bass, 1971) The medial end of the clavicle, where it connects to the manubrium (sternum) is the last bone to fuse—starting about age 25 and finishing about age 31. (ibid.)   Continuing to grow long after most other bones have stopped is evolution’s way of pushing our shoulders and centers of gravity back and adjusting for the weight we add in our upper torsos.  Posture is especially important in bipeds for stable efficient locomotion and to relieve stress on the lower spine.

According to McDonald (1977) an immature Megalonyx clavicle discovered in Warm Springs, FL has the sternal end ossified and the scapular end still growing.  In humans the scapular end fuses first and the sternal end is the last bone to fuse in the whole body!  (Bass, 1971)  Sloths may indeed reverse the order of clavicular fusion but it’s also possible he misidentified the ends.  Sloth scientists  don’t agree about which end is which.  Leidy (1853) interpreted the small end of the clavicle as the scapular end (like in humans), Hay (1912) likewise, but McDonald says the small end is a better fit with the sternum. (McDonald, 1977)  This is another Megalonyx mystery that won’t be solved until we can find more skeletons, hopefully articulated.

Knowing the order in which bones fuse is important for determining the age of a skeleton. Knowing how and when the different parts of a bone fuse can provide important clues about the significant forces to which the animal is adapting.  Our three sloths with their fused and unfused bones, including the clavicles represent a significant addition to scientists’ catalog of information about sloth growth, development and age determination, but many mysteries remain.

The clavicle is one of the least studied and understood bones in the body.   (Aiello and Dean, 1990) This is as true in Megalonyx as it is in humans.  Early paleontologists were puzzled why sloths had clavicles.  Many activities requiring strong stable shoulders were considered and rejected.  The best answer seems to be to give sloths stability while walking on two legs, but digging can’t be ruled out.   Evolving a clavicle is strong support for our bipedal theory but we have to keep looking for definitive proof.