The lower arms of mammals have two bones–the ulna, which is located on the little-finger side of the arm, and the radius which sits on the thumb side. The narrow end of the ulna (called the head) is the distal or wrist end; the wider end with the notch is the proximal or elbow end.  The notch is called the greater sigmoid cavity or semilunar notch (literally “half-moon”), it rotates on the humerus letting you move your forearm up and down.  The projecting bone above and behind the notch is the elbow or olecranon.  A small depression below the semilunar notch and to the side is called the lesser sigmoid cavity or radial notch, where the radius articulates with the ulna.  A rough bump on the wrist end marks the anchoring point for a tendon that connects the two bones in sloths. 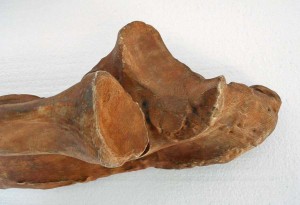 #1 The Ulna is about reaching. The long slender front limbs of Megalonyx stand in marked contrast to its short stout hind limbs. Basically a sloth is a two-legged giraffe that evolved to use its long arms to reach food high in the trees instead of its neck, with its weight concentrated in its lower torso.  Can you think of another large herbivore browser that evolved to reach high by “stretching” a different part of its body?  [Hint:  It has a trunk.]

But reaching is only half the problem—high browsers (leaf eaters) must be able to grasp and manipulate foliage into their mouths—elephants use their trunks; giraffes use their tongues; sloths evolved flexible paws very similar to our hands, with the help of the radius.

#2 Notice how rough the surface of the ulna is.  Many sloth bones are notable for their roughness or rugosity.  The ulna is especially rugose. The increased surface area provides extra and enlarged attachment points for the sloth’s large and powerful arm muscles.  The many grooves crossing the surface of the bone accommodate the bundles of blood vessels, tendons and nerves running down the arm.

#3 The ulna is bent like a bow. This gives the forearm better leverage and more power when the muscles anchored on the ulna pull on the radius.   The great apes and Neandertals show this characteristic too indicating that their survival depended on arm strength more than humans generally need today.  (Aiello and Dean, 1990)

In mechanical terms, the ulna is a simple machine–a lever, turning on the end of the humerus or upper arm (the fulcrum), with a muscle anchored on the scapula or shoulder blade and humerus supplying the power pulling on the elbow which supplies leverage.  Shorter arms and bigger elbows allow extra leverage and help distinguish sloths that dig or burrow from those that pull down branches or use their arms for swimming.  Smaller elbows and longer arms allow fast movement like whips.

The ulna is weight-bearing when the sloth was on all fours.  Occasionally it is used in animals for estimating weight instead of the femur or  humerus.  What are the problems with this? [Answer: It bears an uncertain fraction of the weight.]

Move-like-a-sloth All sloths could likely dig, reach, swim and whip their arms, at least on occasion, but if any of these activities were a critical and regular part of the lifestyle of Megalonyx we should be able to find evidence of specific ulna adaptations.  Digging takes power.  Get down on all fours and mimic a digging sloth.  Sloths that dug regularly had long elbows and short ulnas.  Now whip your arm.  Whipping trades off some power for extra speed and reach.  Sloths that whipped their arms regularly had short elbows and long ulnas. (Fariña and Blanco, 1996)

Flex Your Muscles  Like the sloth, your arm extends when the  triceps muscle pulls  on the olecranon process or elbow.  Cep is Greek for “head.” The triceps has three heads or sites where it originates:  the scapula and two places along the humerus before coming together in a strong tendon that inserts on the olecranon process.

Math Fun Archaeologists studying the remains of ancient people sometimes try to estimate the height of an individual from just the few bones they discover.  This can provide important clues about their diets and general health.  One formula archaeologists use when they find an ulna is:

Find a partner and measure each other’s ulnae (plural of ulna, pronounced ul nay) by resting your arm on a table or desk and measuring up to the wrist.  Do the math and compare the result to your actual height. Discuss—[Who came closest? (within 2 inches)] Was the formula a better predictor for boys or girls?  [This is the formula for adult males–scientists often use a different formula when they know the skeleton is female, or if the individual was very old (to allow for shrinkage).]  The formulas are different for right arm bones vs. left too.  Can you think of a reason why? [Answer:  People are right or left-handed and put different forces on their bones while they are growing.]  Generally archaeologists don’t like using arm bones to make height estimates–leg bones are better predictors, but sometimes an ulna is all they have. (Bass, 1971)  Just for fun measure the sloth’s ulna.  What does it predict for its height using the human formula?  [22 in. translates to a estimate of  9 ft. 3 in ± 2 in.  Pretty close actually to the 2.8 meters De Toledo estimated  for the length of the skeleton! (De Toledo, 1996, Table III)]

The Jefferson Puzzle  The ulna is one of the bones Thomas Jefferson had available when he tried to figure out what kind of animal he had discovered.  See the claw for a description of this activity. Jefferson had the benefit of a complete ulna in analyzing the first Megalonyx and used it to make an initial and conservative estimate of the animal’s weight—800 pounds, based on the weight and thickness of a lion’s ulna. . . conservative because he noted the diameter of the femur was reported to be much larger than the lion’s, suggesting a huge weight to support—2,000 pounds he estimated.  Not a bad guess as it turns out. (Jefferson, 1799)

Imagine a sloth digging like a gopher in your back yard! Scientists have found sloth burrows in South America–one even had the skeleton of a sloth still inside.  (Vizcaíno et al., 2001)  A burrow must accommodate an animal at the widest point of its torso (i.e. its hips).  For an adult Megalonyx that is 6 feet wide.  Make a circle that size. A sloth would have to excavate a lot of dirt to dig a burrow that wide.  Some of the burrows in South America are 20 ft. deep and 75 feet long and exactly 6 feet wide. (ibid.)  We’ve never found a sloth burrow in North America, but some scientists believe the frequent discovery of sloths in caves suggest that living underground may have been important for some sloths in certain locations.  Can you think of a reason why? [Answer: The ground is cooler in hot climates like the Great Plains and the southern United States, and warmer in cold areas like mountains or the North.  That could have been important if some species of sloths, as modern tree sloths,  couldn’t regulate their body temperatures well, or if their metabolisms were slow or if their insulating hair was sparse.]

Imagine a horse or cow trying to burrow—they can’t because they can’t stretch their front legs out far enough to get a hoof-full of dirt without falling over. Burrowing animals need their centers of gravity over their hind limbs so that they can lift their forearms and reach for dirt.   From the initial discovery of ground sloths scientists noted the similarities they shared with burrowing animals (e.g. low centers of gravity, collar bones, claws, etc.) and speculated that they possibly burrowed like giant moles, however, the anatomical features they were looking at may not have been adaptations for burrowing.  Some could be adaptations for walking upright on two legs.

Think about elbows.  Measuring the size and length of the elbow is one way scientists try to determine what was more important in sloths’ arms—a) moving fast; b) power, or; c) if a long reach and flexibility were the important parameters.

Scientists have long believed that bones grow thicker and stronger (i.e. remodel themselves) mostly in response to local stress on the bone, but current ulna research is challenging that view and showing the nervous system also plays a role.  Distant bones unaffected by forces on the ulna, signalled by the nerves, respond as well, as though the entire skeletal system can mount a system-wide response to the local stress.  (Sample et al., 2010).

The ulna is the anchor of the sloth’s forearm, rotating on the upper arm and in Megalonyx bowed and sculpted for exra power.   A long forearm gave them the ability to reach high into the trees and pull down food.  There was a bonus as well—standing and reaching saved energy versus climbing and was handy in defense too.  Arm bones may seem like an odd place to look for evidence of locomotion, but maybe not coincidentally those advantages are the same ones some anthropologists believe put humans on the path to bipedalism.

Jefferson, T. 1799.  A memoir on the discovery of certain bones of a quadruped of the clawed kind in the western parts of Virginia. Transactions of the American Philosophical Society 4: 246-260.