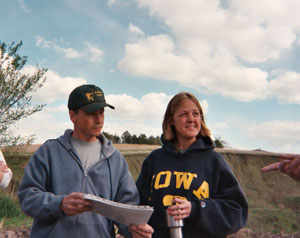 In the fall of 2000 Bob Athen was walking along the West Tarkio creek behind his house in rural Page County, Iowa near Shenandoah looking for arrowheads when he noticed a bone peeking out from the bottom of the creek. A little digging with a pocketknife showed it to be far larger than any bone from any living animal Bob was aware of.  He looked around and discovered more bones nearby buried in the clay and muck.  He didn’t know what the animal could be but knew it was important.  Worried that floods the following spring would sweep away all traces of the animal, he and his wife Sonia spent the rest of the fall and early winter, until the creek froze, working long into the night under the portable lights, recovering the bones.  Freezing and thawing had fractured them into many pieces, so Bob and Sonia saved each bone in a separate plastic bucket.  They spent the winter gluing the pieces back together.

In the fall of 2001 Sonia Athen drove her daughter Katie to Iowa City to enroll her at the University of Iowa.  They brought several of the bones along and took them to the UI Department of Geoscience Paleo Repository to show the curator, Tiffany Adrain.  Tiffany couldn’t believe her eyes and immediately called Dr. Holmes Semken, Jr., Professor Emeritus of Geoscience, an expert in Ice Age mammals.   Holmes almost fell over when he saw the bones.  He knew immediately what they were.  Bob and Sonia had discovered one of the most rare and mysterious animals ever to live in North America, a giant ice age sloth, Megalonyx jeffersonii, or Jefferson’s sloth.  Holmes and Tiffany explained the importance of the discovery and Sonia invited Holmes to see the rest of the bones and dig for more.

On his visit in 2002 Holmes learned the West Tarkio creek marked the boundary between the Athen’s property and a farm owned by Dean and Loretta Tiemann of Lincoln, Nebraska.  Bob had a strong hunch there were more bones buried on the Tiemann’s side of the creek, so Holmes phoned Dean and explained the situation. Dean and Loretta didn’t hesitate and they gave Holmes permission to dig on their land as well.

Holmes approached the author in the summer of 2002 looking for volunteers from the UI Museum of Natural History to help him recover the rest of the sloth.  Holmes believed the animal had crouched down and died in the middle of the prehistoric creek and that the rest of the bones would be buried just a little deeper.  He predicted it would take just two or three weekends to recover the entire animal.    He only missed by nine years and three sloths.

Instead of being articulated and buried in their natural positions, the bones of the dead animal had been scattered–by scavengers and floods; kicked around by animals coming down to drink, and perhaps picked up and moved by curious mammoths.   Recovering the bones required many trips and the effort of nearly 100 volunteers from the University of Iowa, the local community and eventually from all over Iowa.  An international team of researchers was assembled and funding was secure4d from the National Science Foundation. Every trip required extensive planning and coordination to prepare the site, move the nearly 25 feet of soil and dirt overlooking the creek-side deposits and to construct the berms and lay the sandbags needed to hold back the creek.  The water was never again as low as it had been in 2001-2 and entire years were lost when snow melt and rain raised the water level too high to manage with the limited funds and equipment available

Excavation was terminated in 2010 after repeated trips failed to uncover any more bones.  The trail was lost.  New technology like ground penetrating radar may some day enable scientists to discover where the missing bones are hiding.  Or perhaps they are lost forever–carried off by ice age scavengers or an ancient flood.    We are fortunate to have recovered what we have–the second most-complete adult Jefferson’s sloth ever found, also the second most-complete juvenile  (the “toddler”) and the only family-group of Jefferson’s sloths ever found. The discovery allows scientists to fill in some of the blanks about the life-ways of one of the Ice Age’s most intriguing creatures.  At the same time it has revealed new mysteries that will keep sloth hunters searching and hoping for another discovery for many years to come.

Recovery of the bones would have been impossible without the support of the University of Iowa and the National Science Foundation, and the cooperation of the US Army Corps of Engineers, which oversees construction and excavation near US bodies of water.   In addition to the landowners, of course, profound thanks are owed to Phil Mather of Mather& Sons Construction Company who juggled schedules and supplied the heavy equipment we needed whenever called upon, and Will Mott a Council Bluffs, IA fireman and jack-of-all-trades who came to the dig site and operated the backhoe we regularly used.  The Office of the State Archaeologist and Iowa Archaeological Society supplied countless volunteer hours throughout the project.  Finally to the magnificent sloth minutemen and women who responded to our calls for help, summer and winter, without fail—as Holmes would say, “Sloth On!”