This caniniform tooth (“in the form or shape of a canine”) is from the sloth’s lower right jaw or mandible.  The sloth had four (4) caniniforms (sometimes called “tusks”)–two (2) on the bottom and two (2) on top.  Slip the tooth out of its alveolus (socket).  The occlusal surface  (top, biting surface) is smooth and slopes toward the tongue or lingual side and away from the outside or labial side. The root is open because this tooth is ever-growing.  We can’t show you with the plastic prototype, but the tooth is composed of two layers of dentine covered with an outer layer of cementum.  The dentine layers are soft and wear away more quickly than the hard cementum layer as the sloth chews, leaving a hard raised edge for cutting. 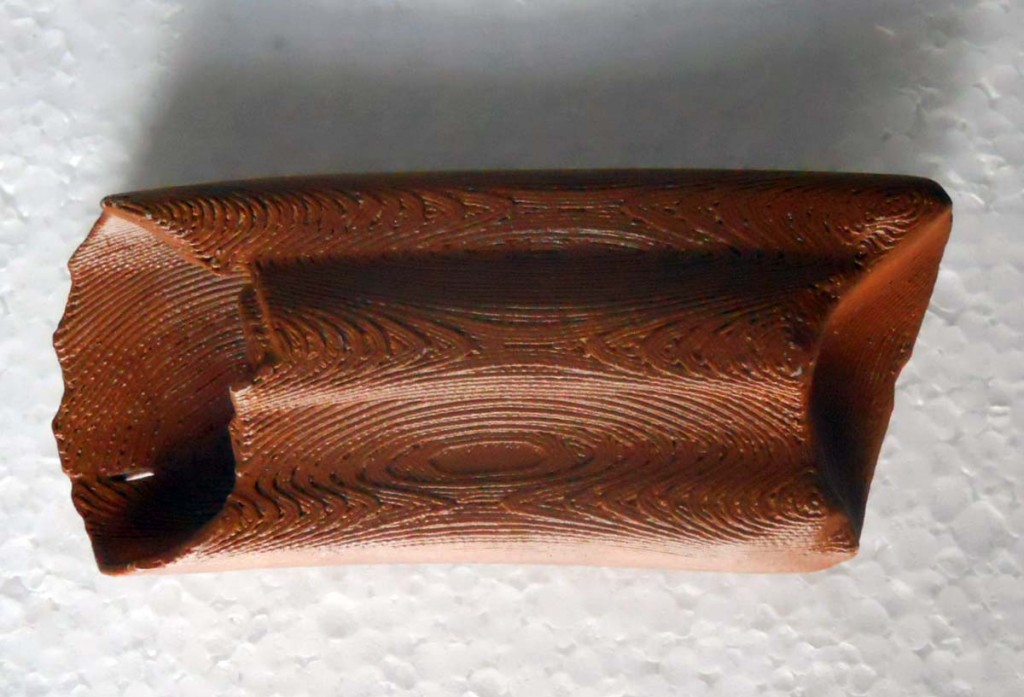 # 1 Megalonyx had 10 teeth in its upper jaw but only 8 in its lower jaw.  The caniniforms, are the largest and are separated from the back teeth or molariforms (“in the form of a molar”) by a gap or diastema (see the mandible lesson).

# 2 There’s no enamel anywhere in sloth teeth.  That makes them unique–all other mammals have teeth with a hard enamel shell over a dentine core pris viagra. Sloth teeth are ever-growing, constantly pushing up to replace the surface area as it wears away on top.  The teeth abrade quickly; they need to be long so there’s always more tooth developing and ready to move up into place.  There’s a network of tiny canals spread throughout the inner dentine supplying nutrients to repair cracks and head off potential cavities.  Sloths never needed a dentist. 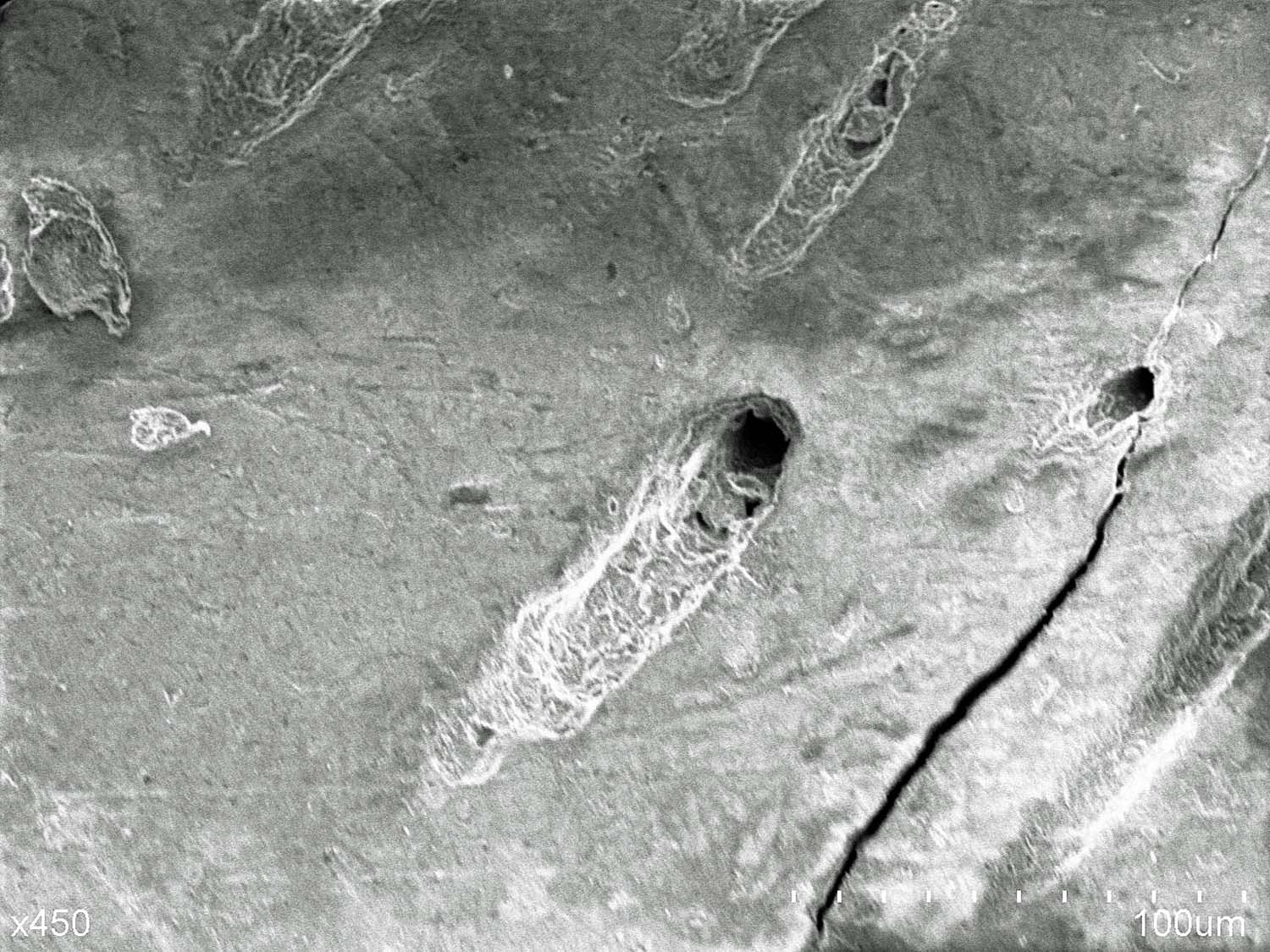 # 3 The teeth may be large compared to yours, but for an animal their size, the working end, i.e. the occlusal  (top biting) surface, is small compared to other similar-sized herbivores.  This suggests most of the food breakdown occurred in the sloths’ stomachs and intestines. (Vizcaíno et al., 2006) They may have had lower lower metabolic requirements also. (Ho, 1967)

The lack of enamel is often cited as further evidence of the superiority of other mammals and the primitiveness of sloths, but Vizcaíno (2009) suggests the dentine teeth were the key evolutionary leap permitting sloths to spread across the hemisphere.  Ever-growing, self-repairing, self-sharpening–i.e. always good-as-new teeth meant no decline in the ability to feed in old age and poor nutrition; females stayed healthy and could reproduce much later in life. The (enamel-coated) teeth of other mammal species are relatively uniform in shape and thus are diagnostic for a given species.  Sloth teeth vary tremendously between different individuals–even teeth in the same location in the mouth. Individual sloths may have been able to tune their teeth to specific habitats and diets, and fine-tune them seasonally.  The different tooth-shapes once led scientists to believe there were many different kinds of Megalonyx but now we know this was just one, albeit very flexible and highly adaptable.

Sloths don’t have milk (“baby”) teeth but start life with the cone-shaped tips of their adult teeth exposed.  As they grow and their jaws become larger their teeth emerge and broaden until at maturity when their teeth are rod-like with parallel sides. Not losing “baby” teeth means no sloth tooth fairy, but it also carries some advantages.  Can you think of any? [Answer:  Being born with a permanent set of teeth means no painful teething periods while juveniles are growing new teeth and going without food or getting by on a limited diet for a while.]

If Thomas Jefferson had only had one (1) tooth he would never have misidentified Megalonyx as a giant lion.  Scientists were very familiar with the strange peg-like, all-dentine teeth of modern tree sloths.  Cuvier (1812) had the benefit of a tooth when he corrected Jefferson’s mistake–a lower right caniniform in fact, recovered by a colleague from the same cave in West Virginia that produced Jefferson’s specimens.

Math Fun Use a metric ruler and measure the width and length of the occlusal surface (top) of the tooth and plot it on the graph below.  The biggest Megalonyx ever found came from Darke County Ohio.  It has been called the Arnold Schwarzenegger of the species he’s so massive. (McDonald, pers. com.) 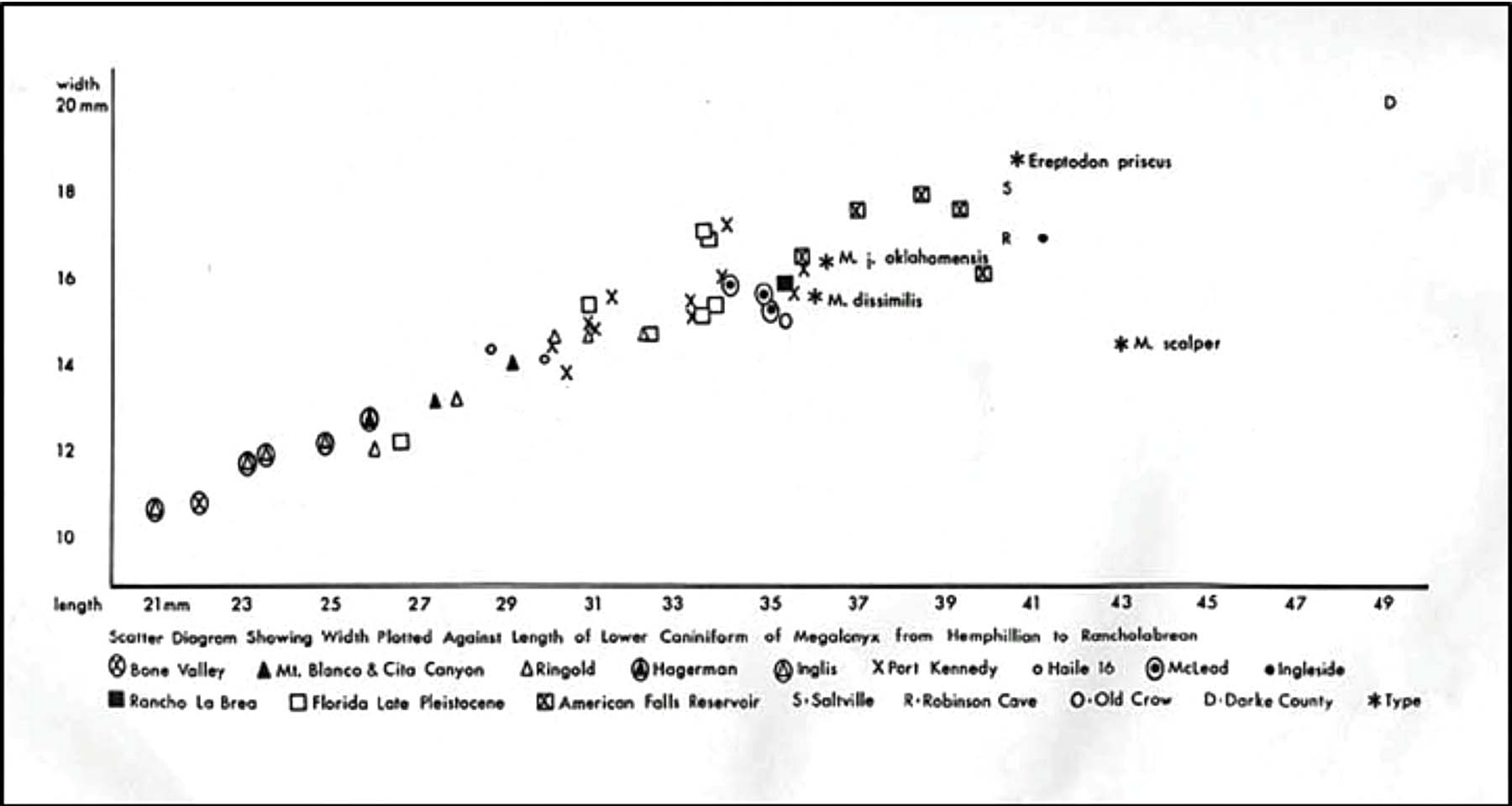 How does our adult compare?

[Big! Perhaps the second largest ever!  It remains to be seen though if our sloth is another Arnold or an Annette.]

Remember, one benefit of having dentine teeth is that because they are softer than enamel teeth their biting surface is constantly being renewed, i.e. they don’t wear out and get dull like those of supposedly more advanced mammals.  Sloths could even sharpen their teeth with specific movements of their jaws.  It shares these characteristics with only one other mammal.  Vampire bats are born with a thin layer of enamel covering their teeth but it wears off quickly and after that, tooth-grinding keeps them razor sharp.

A handy advantage given their nasty life-style.  It has been suggested that this self-sharpening ability gave some sloths the opportunity to become predators or at least scavengers on carrion (meat).  (Farina, 1996)

The ever-growing teeth of sloths build up inside the jaw in a series of concentric dentine layers.  Whether these form periodic growth rings (e.g. monthly or annually) awaits further research.  We recovered sixteen (16) of the adult sloth’s eighteen (18) teeth at the fossil site which may provide an insight into the adult sloth’s diet.  The layers may be testable for their stable isotopes (e.g. carbon) giving scientists clues about the sloths’ diet.

The soft dentine, especially the porous inner layer, is easily abraded.  Scratches from our sloth’s last meal are easily visible under the microscope.   Also, embedded in the teeth are phytoliths–hard silica structures some plants deposit between their cells to add strength. Experts may some day be able to extract them and identify their source telling us exactly what our sloth was eating in its final days. 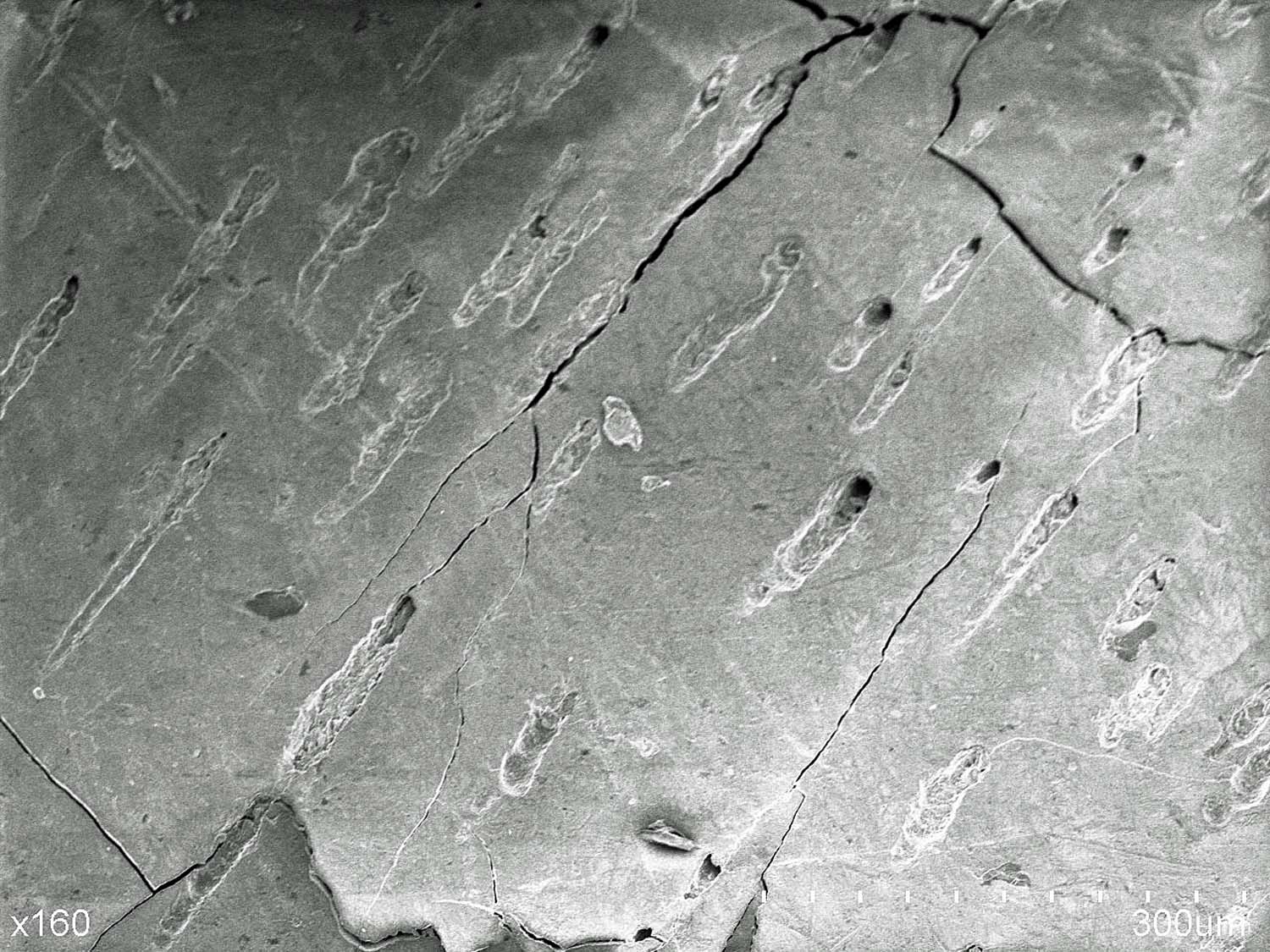 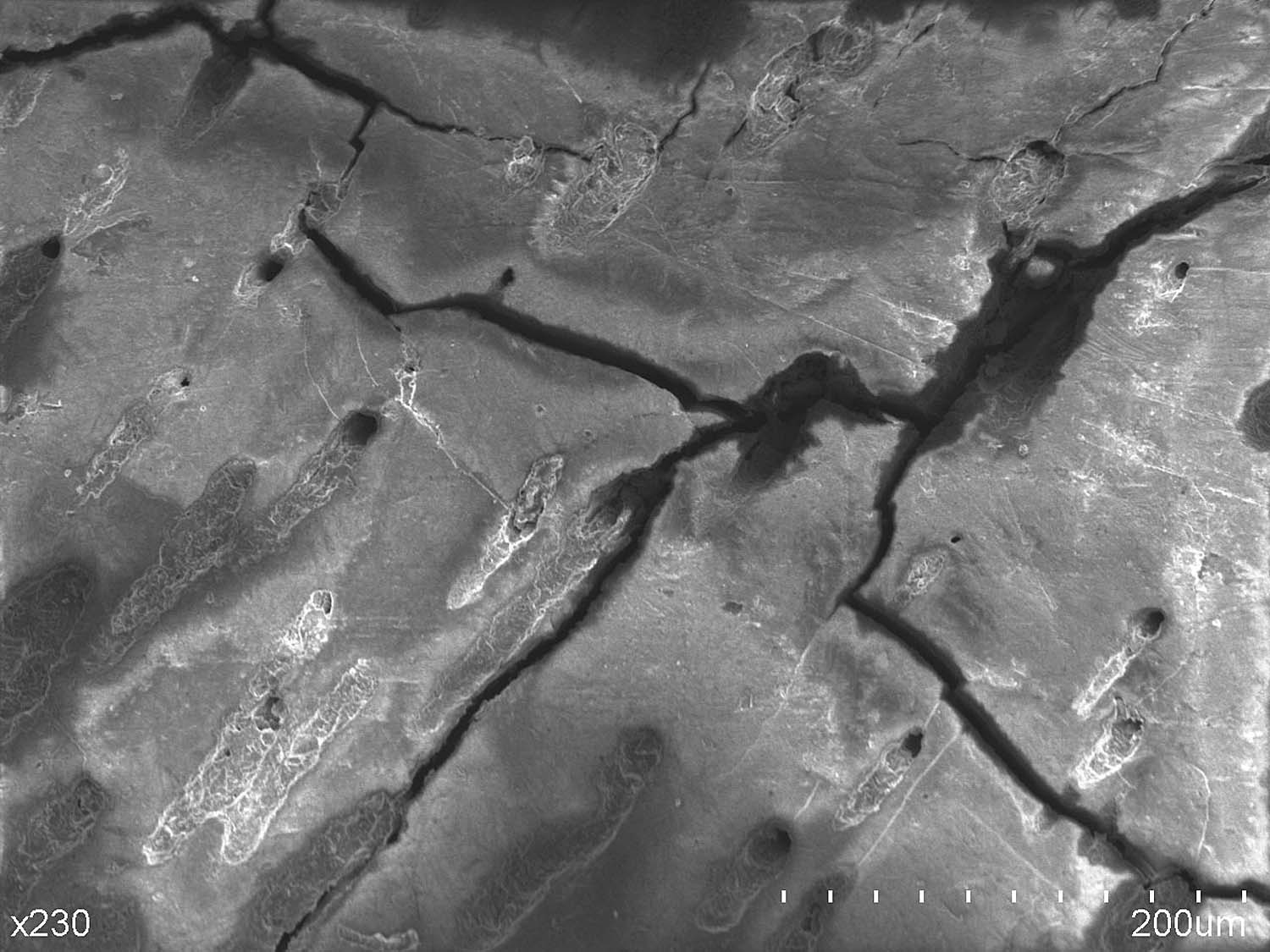 The sloths’ all-dentine teeth are unique to Xenathrans.  Once thought poor substitutes for enamel choppers, a fresh perspective suggests they may have offered significant advantages that gave Megalonyx access to virtually every corner of North America. No one can doubt that a cow is an herbivore or a lion is a carnivore by simply looking at their teeth, but the sloth’s teeth are not at all correlated with a specific dietary preference.  Scientists will have to look for additional evidence in the teeth or elsewhere in the skeleton to come to an accurate conclusion about how exactly individual sloths used their dentition.

Collins, S. M. 1979.  Phytoliths as indicators of plant use at ancient Troy.  University of Minnesota, 362 pp.