Only part of the mandible is in the traveling trunk–the chin and right lower jaw of the adult. The large alveolus or cavity on the superior (top) surface holds the front tooth or tusk, called the caniniform (“in the form or shape of a canine,” see tooth lesson).  On the other side of the chin there’s part of the corresponding alveolus for the left caniniform.  The narrow inward sloping shelf of bone anterior and between the front teeth is called the mandibular or predental spout.  The teeth behind the caniniforms are called molariforms (“in the form of a molar”).  A gap or diastema, separates the caniniform from the first molariform.   Notice how deep the alveoli are and how close they approach the bottom of the jaw.  These are long, deep teeth–the term for that is hypsodont–more on that in the tooth lesson too.  The small hole at the side of the chin is the mental foramen which provides an exit for the mental nerve and blood vessels that serve the front teeth, chin and lower lip. There’s another exit on the opposite side of the jaw.  The mandible has (4) teeth on each side—one (1) caniniform and three (3) molariforms. 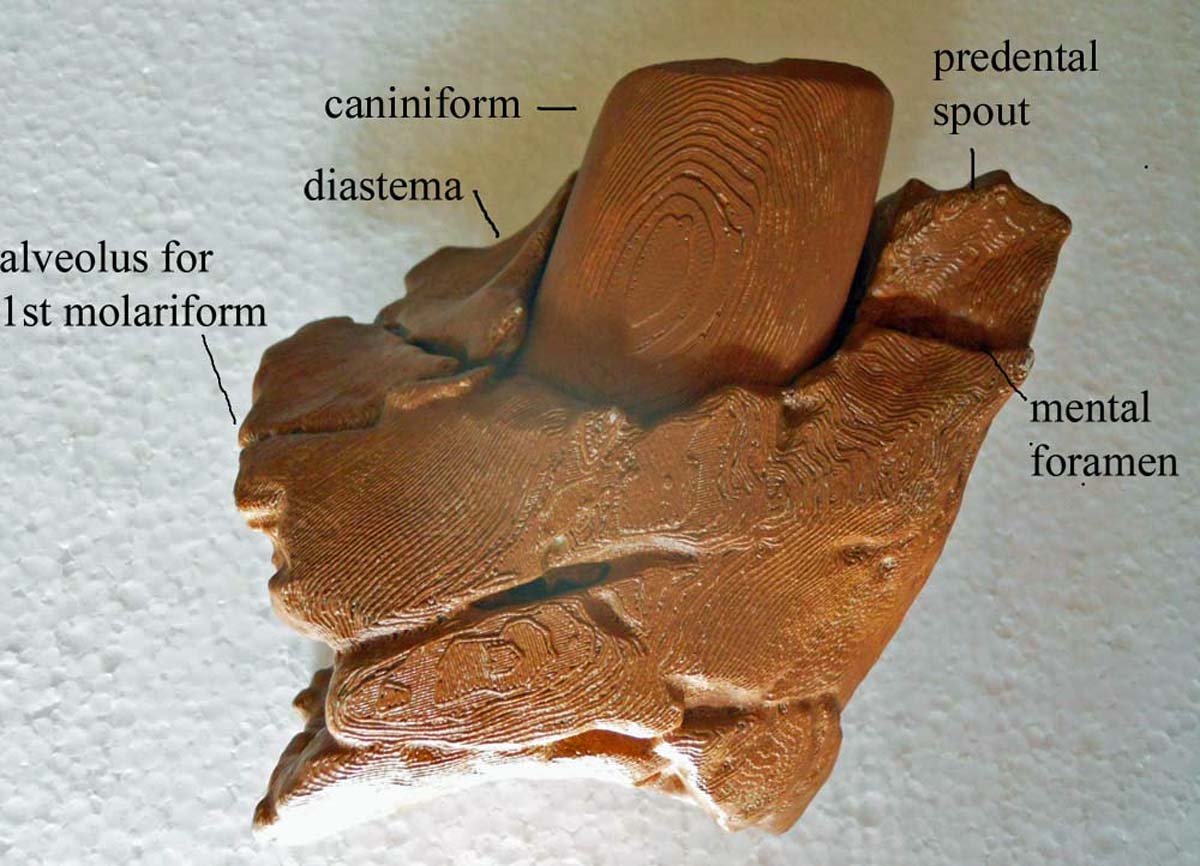 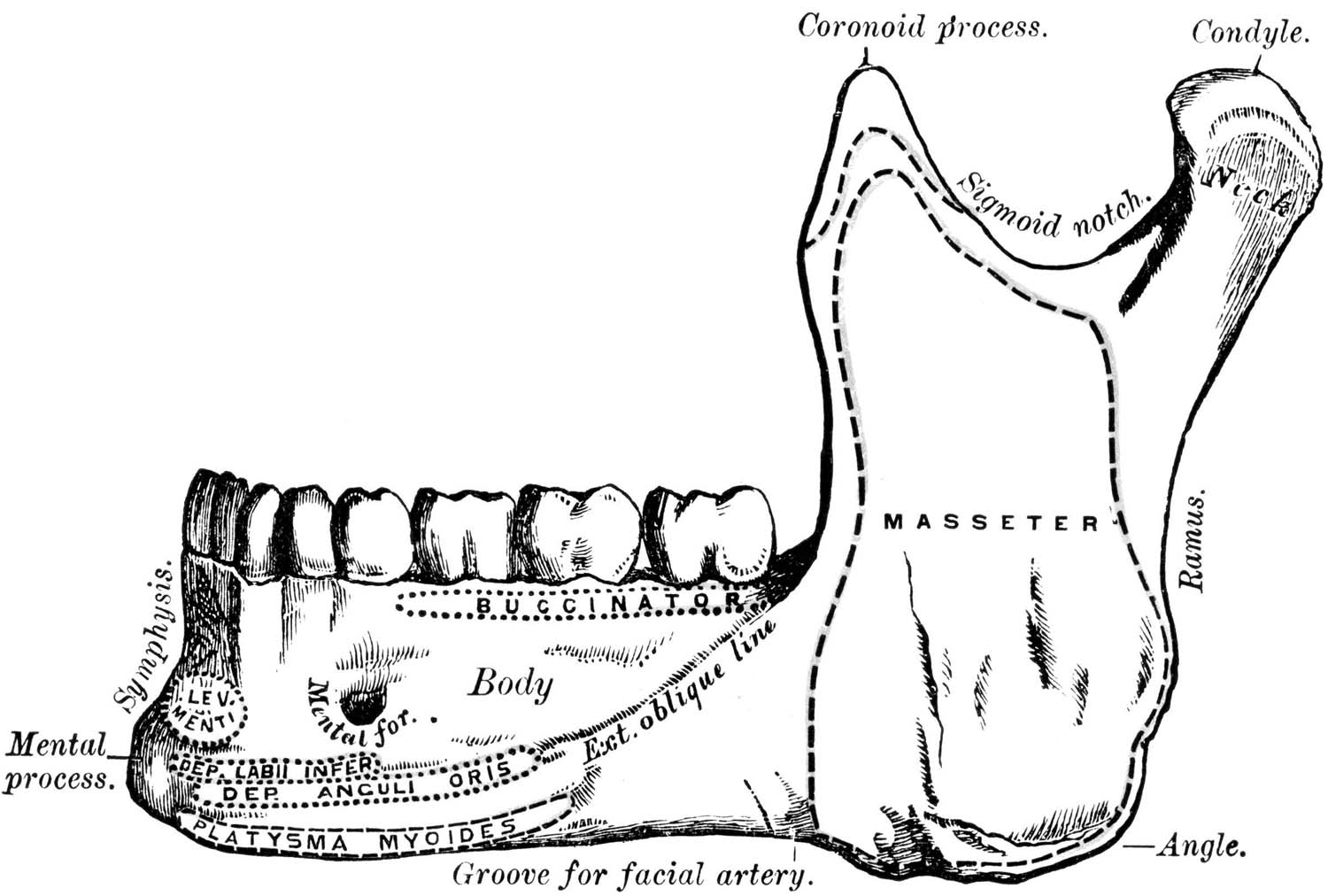 #1 The jaw and muzzle are surprisingly narrow indicating Megalonyx  was a selective feeder, carefully grasping leaves and twigs with its lips and tongue rather than stuffing everything it could reach into a big wide mouth like a bulk feeder (e.g. cow, elephant).  (McDonald, 1987)  Muzzle shape and width is a fundamental adaption by which different sloths partitioned (shared) the landscape (i.e. niche) and reduced direct competition. (Bargo, Toledo and Vizcaíno, 2006)

for gathering food, but Megalonyx had the shortest spout and largest caniniforms of all the members of its family (Vizcaíno, 2009).  All the manipulation ability it needed for foraging came from its front paws and tongue–not long, flexible grasping lips.

#3 The tooth alveoli are deep and curve down and back into the jaw, the tusk cavities especially so. Sloth teeth were ever-growing.  Only about 1/5th of the length of the tooth was exposed, the rest was buried, developing and ready to be pushed up into place as the exposed surface wore down.   The tooth surface eroded rapidly, caniniforms especially so because of all the cutting and crushing they had to do chewing food.  Curving the teeth inside the jaw gave Megalonyx additional room for developing teeth without enlarging its jaw and compromising the ability to feed selectively.  Look again at how close the root of the caniniform approaches that of the first molar. . . now you see the function of the diastema.  Yes, it provides some room for holding food in the mouth while the molars are chewing the previous bite, but mostly it gives the tusk the room it needs to grow–there literally isn’t enough room to fit another tooth in here!

Noble chins The suture between the two halves of the jaw fuses very early in ground sloths and when the fossil bone breaks, as did ours, it’s more likely to fracture through the alveolus of the caniniform than the bridge of the chin.  (McDonald, 1977) A strong fusion is vital at the bridge of the jaw to resist the stress of lateral bending when the animals bit down just on one side, which must have occurred regularly given the size and prominence of the sloths’ caniniforms.   Like us, and unlike other primates, sloths had true chins.  Apes reinforce their jaws with a thick ridge of bone called the simian shelf inside their mouths.  Sloths and humans needed room in their mouths for tongue muscles–humans for speech, sloths for browsing–so we both put our reinforcement outside, in the form of a chin.

Sloths with especially gritty diets evolved very long teeth and extra-deep jaws so that they always had a fresh tooth surface ready to replace the one that was grinding away.  Megalonyx was deeper-jawed than other North American ground sloths, e.g. the smaller Shasta sloth (Nothrotheriops) and the larger Harlan’s sloth (Paramylodon harlani), but not nearly as deep-jawed as the Eremotherium, close cousin of the giant Megatherium that lived  in South America.  Deeper jaws provided more room for the teeth to develop before erupting and cope with an especially abrasive diet.  Sloths living in dusty gritty environments or burrowing for food had deep jaws.

Math Fun  Scientists have discovered two types of Megalonyx mandibles:  1) those with relatively small caniniforms and large diastemas, and; 2) those with larger caniforms that crowd the diastema and consequently make it shorter. McDonald (1977) believes this was sexual dimorphism and that the sloths with large tusks were males and the smaller ones females.  He suggests the males may have used their larger tusks for sexual display, i.e. to attract the ladies.  Measure the distance between the caniniform and first molariform.  Now measure the length of the caniniform opening.  Compare the measurements. If the diastema measurement is larger than the caniniform McDonald says it’s a female. What gender is our adult? [Answer: our sloth is a male by McDonald’s theory.]   Does that make sense?  Why would a male sloth be in the company of two (2) juveniles?    The pattern of larger males is the norm in mammals showing sexual dimorphism, but species with females larger than males are not unknown (e.g. bats, blue whales).   It’s very common in birds of prey.

Can you think of some other forms of sexual dimorphism?  The sexes don’t have to be different sizes for them to be dimorphic.   In lots of bird species the males and females have different colors.   Besides being bigger, what do male lions have to distinguish them from the lionesses?  How about deer?  Peacocks?  Showing off to attract females is a common and powerful force in nature and very common–that’s why McDonald made his hypothesis.

Flex Your Muscles–Look closely at the area under the mental foramina (plural of foramen) and you’ll find a slightly raised ridge of bone.  That’s called the mental tubercle and it anchors the depressor labii inferioris muscle which pulls down the lower lip when you pucker up to kiss someone or an infant suckles.  A simple peck on the cheek uses just two muscles (this one and the orbicularis oris which circles the mouth) but the French are said to use 34 different facial muscles when they kiss, ooh la la. (Blue, 1996)  Sloths used them for suckling too and later foraging, but probably not kissing

The presumed male form of the jaw is matched by other dimorphic characteristics:  1) deeper jaws, 2) larger teeth, and; 3) larger diameters of the shaft of the humerus  (upper arm).(McDonald, 1977)  Interestingly, all of the characteristics relate to feeding.   Was this a way Megalonyx partitioned habitat, that is shared a locality without competing directly for food with other sloths?   It may also have been a way for the females to avoid competing with the juveniles in their care.  The discovery of two juveniles of very different ages suggests an extended period of care or learning.  One juvenile may have been nursing, we don’t know, but in any case, the older one was almost certainly feeding itself.  Large tusks may have given the female the ability to eat older, rougher stems and leaves, saving the most nutritious tidbits for her fast-growing toddler.

Can you think of other reasons females might evolve to be larger than males? Perhaps they could compete better for scarce resources.  Large size might have protected them and their young from predators or male aggression. Sloths likely couldn’t flee, as do most herbivores when they encounter a threat, so “Mom” would have been the first line of defense. Larger females can also give birth to bigger healthier babies. (Ralls, 1976)

Finding the jaw and skull of the adult at the Tarkio site with the other bones is the strongest evidence that the animals were living there along the river at the time and not transported there by a flood, for example, or by floating across a lake or down a river.   The jaws and heads of animals are very loosely attached to their bodies. . . flexibility is important at their respective joints.  They are also relatively heavy so that shortly after death the muscles holding them to the rest of body decompose and they often go separate directions.

Confirming which form of the mandible represents male and female is a high priority.   Megalonyx wasn’t the only ground sloth exhibiting distinctive jaw differences.   McDonald et al. (2004) have identified two different forms of Harlan’s sloth, Paramylodon harlani, one with robust wide skulls and the other with smaller narrower skulls.  These differences are matched with two morphologies of caniniforms that McDonald has suggested indicates sexual dimorphism in the species (McDonald, 1995). Likewise, Eremotherium is reported to exhibit possible sexual dimorphism based on skull differences. (Fields, 2009)  Were these feeding differences matched with differences in feeding posture?  Locomotion?  Other important behavioral differences?  We just don’t know.

Mandibles say a good deal about Megalonyx‘s dusty habitat, abrasive diet and selective feeding ability, and seem unrelated to the animals’ mode of locomotion.  But, selective feeders need some way to reach their desired food and manipulate it into their mouths.  Without the prehensile lips provided for by a long mandibular spout, all Megalonyx had was its tongue and arms and paws. Raising up on two legs freed its paws for food-gathering and gave it access to new food-sources unavailable at ground level.  Interestingly, there was a primate experimenting with this same bipedal feeding strategy 4-6 million years ago. . . us! 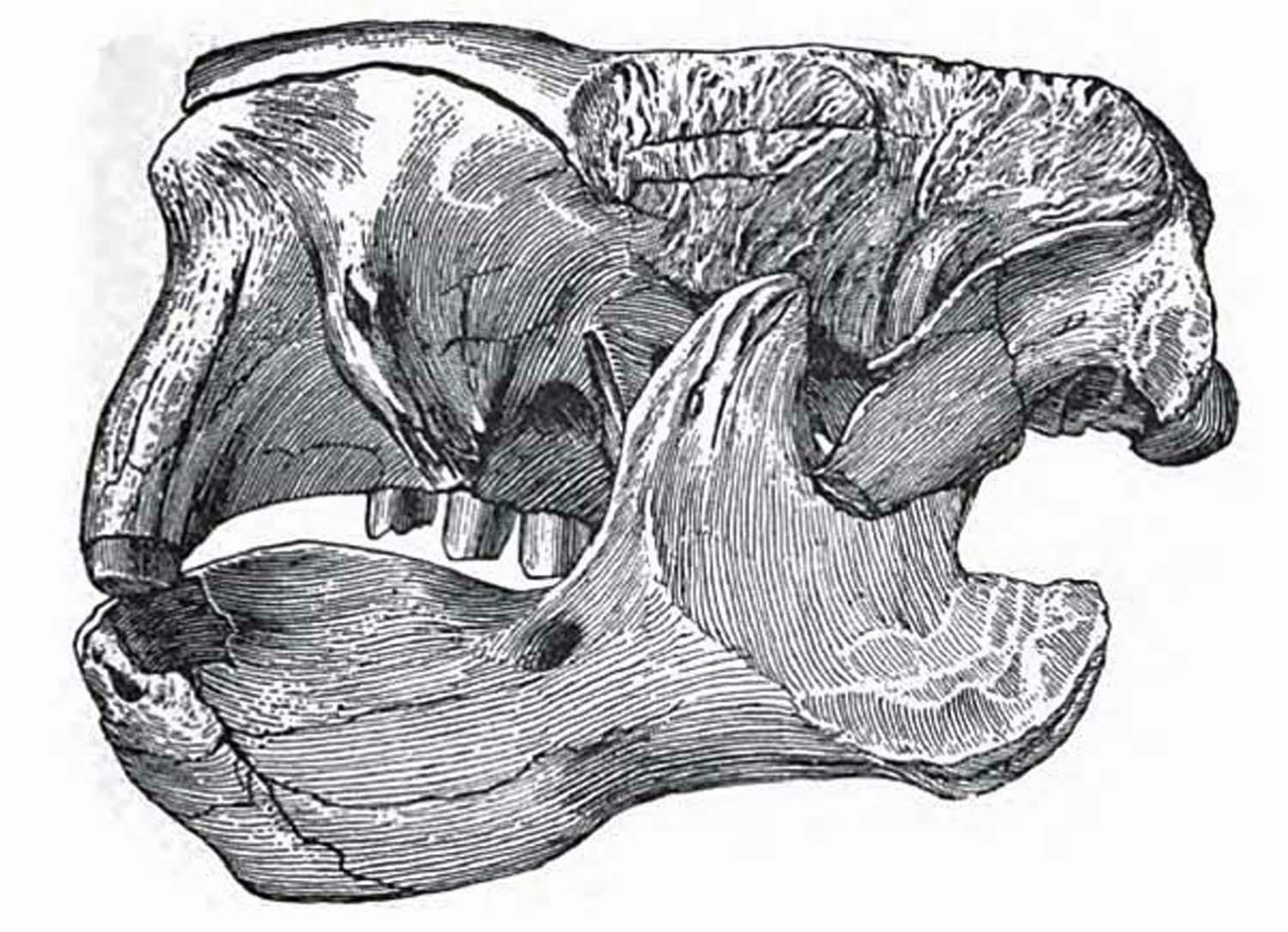