The glenoid cavity is pear-shaped, wider at the bottom and narrowing at the superior end. The oval shape is generally believed to confer a greater range of motion versus the narrower sockets of quadrupeds.  (Aielo and Dean, 1990)  Note the glenoid notch midway up the ventral rim of the socket of the adult’s bone.  About half (55%) of humans have them too. (Prescher and Klümpen, 1997) Scientists disagree about their purpose.  The ventral surface of the scapula or subscapular fossa gives origin to the broad subscapularis muscle, part of the rotator cuff  quartet, which gathers as a wide tendon wrapping around the glenoid cavity to insert on the lesser tubercle of the humerus.  The notch may simply form due to the pressure of a tendon and subsequent atrophy of the bone. (ibid) Alternatively, it may provide extra surface area for anchoring the inferior glenohumeral ligament, one of ligaments surrounding the cavity, important for stabilizing the humerus head (Miles, 1997).

More things to do

More Math Fun1:  How tall were the sloths?  Using the diagram below, predict the sloths’ stature with some different Campobasso et al. (1998) formulas and compare answers. (You’ll have to adjust some of the measurements for the missing juvenile epiphyses by adding 1/4″ each to A, C, D; add 1″ to B and 2″ to E. Alternatively, trace an outline of the juvenile scapulae on a large piece of paper and draw in the missing pieces using the adult as a model.  Measure from your drawing.)

You may have noticed that most of the Campobasso formulas are based on the length or width of the scapula, while some use its thickness.  Giurazza et al. (2013) combined approaches and defined a formula using the longitudinal scapula length (LSL).  The results were accurate within plus or minus two inches in 75% of the cases for their Italian population.  That’s, “Benissimo!”  Try it out on the adult. 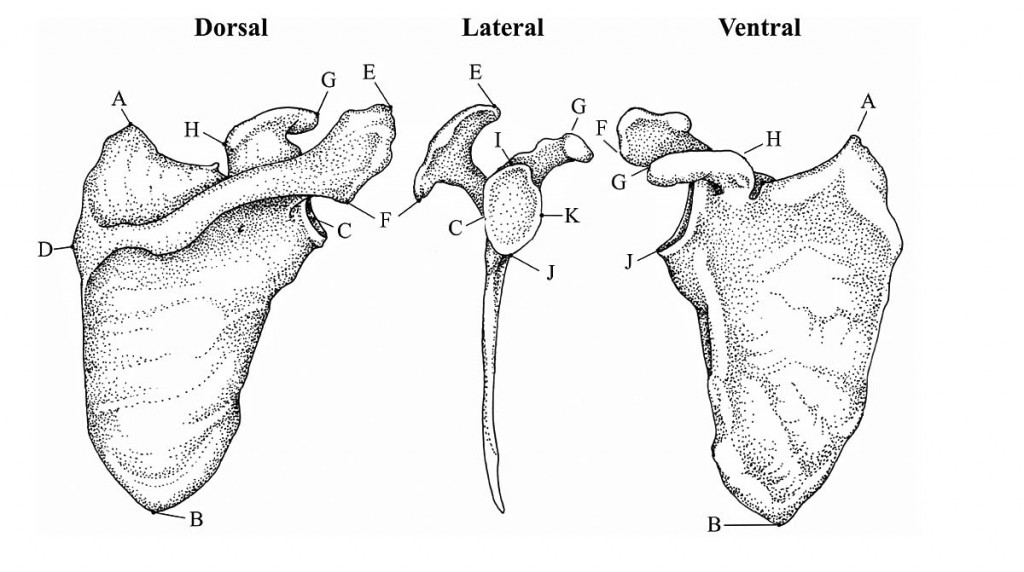 More Math Fun 2  How heavy were the sloths?  Generally, biologists believe the mass (weight) of an animal is a much better predictor of its lifeways than its stature (height).  Now that we have a general idea of the sloths’ heights, can we calculate their weights?  We’ll talk about estimating weight in the femur lesson, but for now assume the adult weighed 2,800 pounds.   In that case, what do you estimate the juveniles would have weighed?  Defend your estimates.    Remember weight increases by the cube of the length increase.  For example an animal that is estimated to be 2X taller is probably 23, or 8X heavier—twice as big in every direction.

More Math Fun 3 How big is the adult sloth compared to others?   Use a metric ruler to measure the maximum length and width of the glenoid cavity of the adult scapula.  Use the chart below from McDonald (1977) and compare it with other sloth scapulae that he measured.  Assuming all Megalonyx adults have similar proportions and that larger individuals have bigger arms and longer and wider glenoid fossae, what can you say about our adult?  Compare your answer to the results for the teeth.  (see caniniform lesson)

Can you think of any possible flaws in this logic? [If sloths showed some dominance of one arm over the other it will grow stronger and might have a larger fossa, though forensic scientists generally consider this irrelevant in predicting human stature. (Byers, 2005)  There is evidence that the upper arm bones (humerii) of males and females were different, perhaps to allow foraging for different food.  (McDonald, 1977)  Shouldn’t the scapulae be distinguishable too?  Our assumption that individuals will all have the same glenoid proportions isn’t true.  Look at the chart again.   Notice how much wider the socket is for the Seatac Megalonyx given its length and how relatively narrow the Warm Mineral Springs specimen is.  Is this just normal variation, sexual variation or geographical variation due to climate?   There is also evidence for a general size increase over time.  A final thought:  the glenoid cavity is a complex shape and perhaps it’s not the depth, length or width that’s important but total surface area.  Prescher and Klümpen (1995) took self-adhesive rubberized paper labels, molded them to the contours of the cavity, trimmed the paper to the fossa edges and then removed the pattern to make precise measurements of the total area. They found a high correlation with the length and width of the scapula and sex of the individual in their German (human) sample.]

More Math Fun4 Scientists studying our primitive ancestors look at the angle the glenoid fossa makes with respect to the blade of the scapula to determine if it was oriented up into the trees, presumably for climbing, or sideways (laterally), for walking on the ground more efficiently. The variation in the shape of the axillary (lateral) border makes it difficult to use for comparisons, so Stern and Susman (1983) suggest using the prominent ventral bar just inside (medial) to the border. It’s straighter and makes measurement easy in sloths as well as humans.  Measure the angle and compare Megalonyx to humans and other primates. Can you think of other reasons to account for the sloth’s angle? 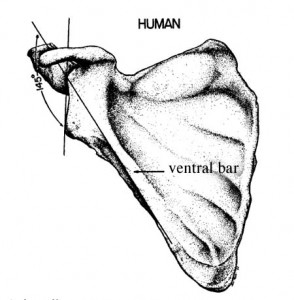 [The angle is about 125° in Megalonyx.  It’s one more characteristic that suggested to early scientists that Megalonyx lived in trees, but in this case it was probably just an adaptation for the sloth’s high-browsing lifestyle, and made reaching for food easier.]

That pulling your are doing with the paddle uses many shoulder muscles but the most important one is the teres minor.  It arises for the axillary border of the infraspinous fossa and inserts into the greater tubercle on the upper humerus.  Early scientists studying Neandertals noted the thick rim of the axillary border,  sometimes with groves on the top and/or bottom surface to increase the surface area, and thought Neandertals had evolved this characteristic uniquely.  Today, however, they recognize it as one more way this supremely adaptable bone can model itself (i.e. grow) in response to the demands placed on it. The same characteristics are seen in the scapulae of Native Americans from the Pacific Northwest Coast and are believed to have developed in response to the life-long demands of paddling their heavy canoes.  (Odwak, 1995)  Neandertals clearly were doing heavy lifting, perhaps working wood or making stone tools to develop the same features.  Sloths probably weren’t paddling canoes but can you think of other activities that would have made similar demands on this muscle?

Pretend to throw a baseball like a big league pitcher.  Wind up and then swing your arm back; as you go to step forward (called late cocking) notice how far back you’ve turned your shoulder. . . much further than your primate ancestors had to reach climbing in trees!  Nature gave us a coracoacromial ligament to hold the head of the humerus down, not to hurl baseballs at 96 MPH.  A large percentage of baseball pitchers end their careers with sore shoulders and torn rotator cuff muscles after years of grinding tubercles and other protrusions on the upper end of the humerus against the ligament in this extreme position. The injury, called impingement syndrome, is also common among tennis players (think about serving), and especially swimmers (think about doing the butterfly stroke or freestyle). As many as 15% of swimmers showed significant signs of this injury in one study. (Hawkins et al., 1980) So why didn’t nature evolve a stronger joint?  Recent research suggests “winding up” is more than just an expression used by baseball announcers.  The power we have to throw projectiles comes from the  elastic energy we store in our stretched tendons, ligaments and the muscles of our legs, hips, torso, shoulder, elbow and wrist,  and release in an explosion of force.  It’s one of the fastest motions a human can produce and unique to our species. (Flesig et al., 1995)  Some anthropologists believe our hominid ancestors evolved bipedalism specifically to free the arm to hunt thusly. (Roach, 2013) 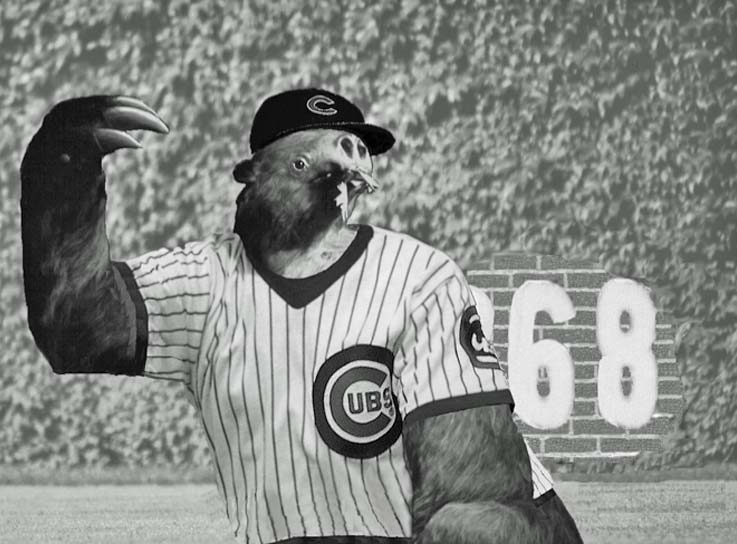