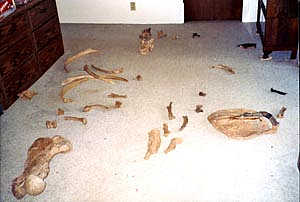 I’ve been studying an old photo Bob Athen took in 2002 of the bones he and Sonya had collected, spread out in their upstairs hallway and arranged as they originally found them. Like a fortuneteller staring at the leaves on the bottom of  a teacup, I’m trying to figure out what, if anything, it means about the conditions at the time of death and where we should dig next.

The large femur (thigh bone) at the bottom of the photo sits furthest downstream, caudal (tail) vertebrae lie upstream, at the top. “Up” and “downstream” are references to today, not necessarily then.  The mix of large and small bones in the photo tells me they haven’t been sorted by flowing water, i.e. the West Tarkio Creek wasn’t flowing over the site in sloth-time.    A platter-sized scapula (shoulder blade) rests on the right and an atlas (the first cervical vertebra or neck bone) on the left–the only bone Bob says he didn’t have to glue back together.  Between them I see many elements from the chest–ribs, sternabrae, sternal ribs (sloths have separate interlocking breast bones instead of a single sternum of cartilage), a collarbone and vertebrae. It’s no wonder we thought we could recover the whole skeleton in just a couple of weekends. From these bones it looked like the animal was lying in a relatively small area and we only had to dig a little deeper. Of course, we know now that the main concentration of bones was 8-10 ft. to the north, if you count the adult pelvis as “ground zero,” off the left edge of the photo.    The sliver of bone sitting below and to the right of the scapula is a piece of the toddler’s rib.  We wondered where such a fragile bone could fit in the adult but confirmation of the juvenile had to wait until we finished digging the north side of the creek and discovered the main concentration of juvenile bones about 6-8 ft. to the right (south) of the scapula. More about that another day.  The bones in the photo must have been moved, but how? And if we knew how they were moved, could we calculate where the missing bones are?

Water didn’t transport the bones here. Besides the lack of sorting, the bones are sitting in clay with some very fine-grained sand. Any current that could move these bones would have left them buried in sand and gravel.  There was little if any current if this clay settled all around them (Voorhies, 1969).  Obviously the wind didn’t move them either, or gravity. There are only a few possibilities left:  1) they floated here–that is, maybe the sloths died in the water, they bloated and floated, and after the different limbs disarticulated, they were pushed around by the wind and waves and eventually, after the flesh decayed, the bones fell here; 2) predators and/or scavengers dragged the bones here, or; 3) they were accidentally kicked here–underwater or while they sat exposed for a while on the surface of the ground (at the edge of a watering hole?)  Some show more signs of weathering than others.

It’s hard to imagine how three sloths could have died in the water all at the same time, with a flood out of the question (remember, no current).  Could they have fallen through ice and drowned? Starved in a drought?  There are probably clues in the blue-gray clay that surrounds the bones.  Maybe the geochemistry or microfossils hold the answer.  Was this a lake?  The closed oxbow of a river?  We’ve never observed any layers in the clay and there’s no sign that the bones are sitting on a surface that the sloths actually lived on.

Maybe we can define the extent of our deposit with some drilling and coring. If there was a body of water here, how far did it extend? Bob says he’s seen exposures of our blue-gray clay all over the county.  How far would pieces of a sloth float before the bones dropped off?  If the bones floated to these locations, something moved them again.  The packages aren’t anatomically correct–for example, we’re finding ribs, teeth, jaws and arm bones piled together.  Experts would say the bones are “associated but dispersed,” that is they are scattered over an area much larger than an articulated skeleton but can largely be linked to individual animals by anatomical characteristics (Behrensmeyer, 1991).

We’re still wondering about the role of predators here–both as a cause of death and movement.  There are only minor signs of scavenging (unless you count the absence of entire limbs!).  That implies the lack of predator competition at the kill (if it was a kill) and little reason for a wolf, for example, to drag a limb very far, or to gnaw all the missing bones to splinters, but evidence of predators is a topic for another day. Floating away could also account for our missing limbs. In any case, you still need a force like random kicking to explain the skeletal hodgepodge.  But how are you supposed to figure out where a bone could have randomly floated or been kicked?   Maybe we can with the help of some mathematics. . . . Dave