Why was it that only certain bones, and not others, got separated from the main concentration, and how did these end up here?  If we understood that, would it help us find the missing bones?

Under normal conditions bones don’t start moving until they are completely disarticulated (Hill, 1975).  A lot of researchers have tracked the decomposition of individual carcasses over time, but Hill picked out a large area in East Africa to study and recorded the status of disarticulation for every Topi, Damaliscus korrigum, a common medium-sized antelope, in his 475,000 square mile study area.  He found a surprisingly consistent pattern.

Under normal conditions, a mammal will follow the same sequence of disarticulation, regardless of how it dies. All vertebrates share the same general body form, so the sequence is basically the same way you carve a Thanksgiving turkey–head and tail, arms and legs, and finally the trunk.   Mobility demands a certain amount of loose attachment and after you’re dead everyone looking for a meal, be they a cannibal or carrion beetle; lion or wolf; maggot or mite; bacterium or fungus, follows the path of least resistance when they start dismantling you.  That’s determined by the architecture of your joints (i.e. tendons, ligaments, etc.).  Juveniles are different–their bones generally come apart at the epiphyses, where they are still growing and unfused, before they detach at the actual joints. The loosest (adult) connections are where your jaw attaches to your skull, your head attaches to your neck and where your tail (if you have one) and limbs attach to your trunk.  Hill, by observing thousands of skeletons learned the disarticulation sequence of each major unit or appendage. 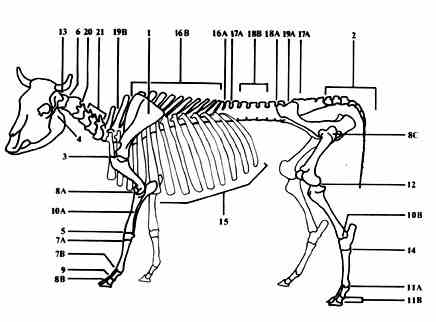 The pattern of disarticulation may reveal some important information about a bone assemblage:

1) Significant variations may indicate the influence of an important environmental factor.  Water, for example, accelerates disarticulation and may change the sequence.  On land, animals tend to disarticulate from the trunk out (proximal to distal).  In the water the extremities of animals disarticulate more quickly (i.e. distal to proximal), though jaw and head are still in first place (Schafer, 1972).    Extremely arid conditions may dry tendons and ligaments around the ankle and wrist assemblies of smaller animals and inhibit disarticulation.  But that’s not likely to be an issue in our case, even if there was a drought.  Large animals, with their smaller surface area: volume ratio retain a lot of body water and bacterial putrefaction is likely to disarticulate the bones before a carcass mummifies.

2) Flowing water only transports individual bones, unless there’s a flood, so the disarticulation sequence determines what gets transported and scattered, and in what order.  Predators may move a group of bones initially but for the most part bones are dispersed individually.  Shouldn’t this be true of kicking as well?

3) Disarticulation means some bones will be covered and protected by sediments sooner, and preserved. The survival of a fragile bone (like our scapulae?), among others less well preserved, may be explained by this.  Is it significant that most of the missing sloth bones come from the right side?

4) Disarticulation provides an estimate of the interval between death and burial by observing the degree of weathering on various bones.   The closest we’ve come to finding anything that might have still been articulated when it was buried is the string of 3 thoracic vertebra next to the pelvis.  Since they are among the last bones to disarticulate, the implication is the sloth had plenty of time to disarticulate and scatter before burial.

5) Disarticulation provides clues about which bones should be associated.  That can be important when they start being scattered.

The scattering stopwatch starts with disarticulation of the first bone.  Hill observed that the largest concentration of bone is generally where the animal died.  If scattering is random and operates continuously, then the distance from the center, or “ground zero,” will correspond to a bone’s order of release as a single element–i.e. all other things being equal, the bones farthest from the center disarticulated the soonest.

Kicking can cause a significant amount of movement over time.  Bones are more likely to be kicked further apart than closer together, but the curve flattens over time.  At some point of dispersion, it’s almost as likely that a kick will propel a bone back closer to the center, as away, i.e. the dispersion field isn’t infinite and eventually stabilizes.

Illustration of differences in probability of dispersion at different distances of separation.  Bone B and bone B’ both move K units in a random direction in a single event.  B and D are K units apart, and B’ is 2K units from D’. The probabilities of B moving nearer to D, and B’ moving nearer to D’ are proportional to angle ABC and angle A’B’C’.  The general formula for this probability P=1-(arc cos (1/2r)/180) where rK is the distance separating the bones. (Hill, 1979)

This means we don’t have an infinite area to search and maybe we can find a mathematics/statistics student who can make some assumptions about the average distance bones are kicked based on where we’ve found certain bones and calculate some probabilities for finding our missing bones within specific circles=r.

There are still some unknowns:  1) The scapulae may disarticulate first but they don’t offer much vertical area for kicking.  Are they really likely to have been kicked the furthest? 2) Will animals avoid trampling and/or kicking especially large bones? Heavy bones?  Does it depend on the trampler/kicker (i.e. bison vs. mastodon)?   The mandible, atlas and caudal vertebrae seem the logical bones to focus on–everyone agrees they disarticulate early, regardless of conditions and they aren’t so large that most animals would avoid them.   But it still seems like a problem someone could model on a computer. . . .  Dave

4 thoughts on “How do you explain the bone arrangement? Part 2”