The astragalus (called the talus in humans) is basically the fulcrum of a lever rocking on the calcaneum or heel bone like a teeter-totter, moving the foot up and down when muscles pull on the Achilles tendon.

The astragalus has a convex side (the superior or “up” side) and concave (inferior or “down”) side.  With the convex side up you’ll see a heart-shaped articulating surface—orient the bone so it looks like a Valentine’s Day heart.  The smooth surface on the left side of the heart wraps around the bone and makes a right angle down to the bottom.  The fibula articulates on the left (lateral) side of the heart, extending down the outside of the astragalus, providing stability with its projecting tip. The tibia sits on the right (medial) side of the astragalus providing the main support for the leg column.  A pear-shaped cupped depression projects forward and slightly to the right pointing to the sloth’s big toe—that articulates with the navicular bone, which serves as the base for toes 1-3.  Extending laterally (to the left) from the navicular cup is the articulation for the cuboid bone, which connects to toes 4-5.  Turn the bone over.  The astragalus rocks on the calcaneum in a concave saddle formed by two articulating surfaces– a large one posterior and a smaller one anteriorly and medially (on the left side now).  Note that the joint runs diagonally across the bottom– the astragalus rides “sidesaddle” on the calcaneum. 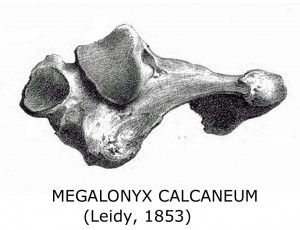 The deep groove separating the front and back joints is called the interosseus groove or sulcus tali.  It lines up with a corresponding groove on the calcaneum forming a deep bony canal called the sinus tarsi. The rough texture of the canal serves to anchor a strong inch-wide ligament called the interosseous talocalcaneal ligament (ITCL) which ties these two critical foot bones together.