One of the many mysteries we have about the sloth site is why we have so many more bones from the right side than left side of the adult.  (The photo (below) is misleading—it comes from an outreach program where we had to spread the bones out so that viewers on the “bad” side had something to look at.  The real difference isn’t absolute, but it’s striking.) There’s no intrinsic reason why the bones on one side of the sloth should have fossilized better than the other, so it must indicate something about the conditions near the time of death. (photo borrowed from) 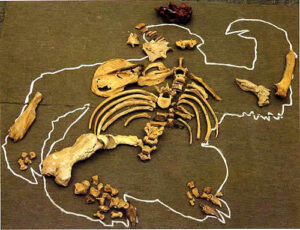 Gary Haynes reports that when African elephants die, if they don’t drop in their tracks, most lie down on their left sides (Haynes, 1988).  It’s only a “strong . . . impression,” though, and he hasn’t a clue why it should be. Bones on the “down” side, have a better chance of being covered by water or sediment and protected from scavengers under some circumstances, and they may be more likely then to survive and tell the story of their early taphonomic history.  Haynes found a mammoth scattered at a site in Alaska where the transverse processes of the thoracic vertebrae were all heavily gnawed just on their right sides, indicating that the animal fell exactly as predicted (Haynes, 1980).

Different microenvironments that become established inside a carcass during decomposition could also be a factor. The role of the decay and putrefaction microbes in the process of fossilization is much debated, but there is no doubt that a mega-sized mammal like a sloth creates its own internal environment as it decomposes, with sufficient volume, mass and thermal inertia for the process to proceed for some time independently of external conditions.   That’s especially true in the winter without the insects to pierce the skin and interrupt the anaerobic bacteria. Lying on the ground, the “down” side of an animal as big as an adult sloth, removed from the desiccating effects of the sun and wind, or the cold, will stay warm and humid, creating a microhabitat for different microbes to thrive, selectively fostering or hindering the process of fossilization (Coe, 1978).

Presumably anything that put the sloth on its side, and kept it there, would produce the same effect.  But, any protection offered by dying on one side versus the other is apt to be fleeting as carnivores will usually roll a carcass over to gain access to the parts underneath.  However, large carcasses may be difficult for scavengers to turn.  Frison and Todd report it took 15 people pulling on ropes to flip the carcass of a large male African elephant they were butchering, even with the top side defleshed (Frison and Todd, 1986).

Turning over a 1-ton sloth could be difficult too, depending on the scavenger, and impossible in the winter, with one side frozen to the ground.   Winter is the time of bounty for most carnivores. Hunger, stress and the snow leave prey vulnerable and relatively plentiful. Under normal circumstances predators can afford to ignore a frozen carcass and go hunting for something still warm and breathing. Consequently, winter carcasses are usually far less utilized than those of the summer dead or killed (Haynes, 1980).   Winter weather, access to only half of the adult sloth, and an abundance of other food, may go a long way toward explaining the condition of our adult’s bones and the contrast with those of the juveniles. . . but, is there any way to determine if  the sloths died in the winter? . . . Dave

4 thoughts on “No left turn”