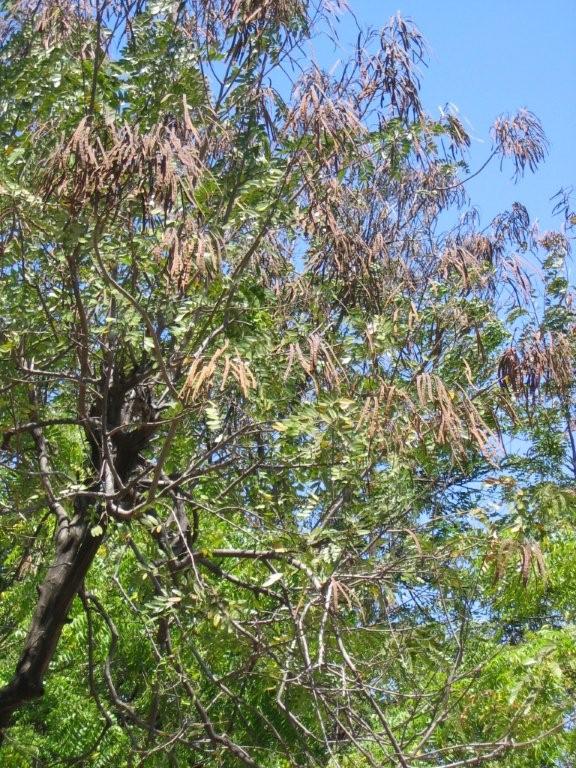 I found an interesting parallel to the honey locust story featured in “Sloth Music”  in the central square of Granada, Nicaragua where there was a tree with seed pods that looked like those of a honey locust (the leaves are different). I asked our guide about it and he said that it was a melinche tree. He knew his stuff because he wrote the genus and species (Delonix regia) on the back of an envelope. He noted that as a child he and his friends would climb the melinches to collect the longest seed pods which invariably were at the top of the tree. They used them as swords because they liked the accompanying rattle (dinner bells!) during their games. I googled the tree and found that they are in the same family (Fabaceae) as the honey locust. Delonix is now endangered in the wild but is spread worldwide in the tropics as an ornamental tree, the Royal Poinciana. Recall that the honey locust also had a restricted range until it became a popular shade tree in North America. 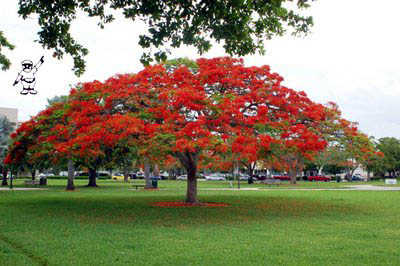 Most sites list Delonix as native to Madagascar. If correct, who is the ghost that once spread its seeds? Giant lemurs (the size of a gorilla) and elephant birds (described as 10 feet tall) once inhabited the island (sub-continent). With the largest seeds being toward the top of the tree, it is unlikely that the pygmy hippo was its’ designated disperser.  All large animals became extinct with human colonization and with that, a shrinking distribution for Delonix.  It is clear that the living indigenous mammals, all relatively small (lemurs and tarsiers), are (were) not involved in its dispersal.  Holmes