We’re like Goldilocks wandering around in the cottage of The 3 Sloths—the table is set, the beds are made and the TV is on—maybe the owners are out in back . . . but we’re pretending they’re gone forever and we’re in control now. Look around—sloths may be extinct, but they aren’t dead! We’re surrounded by signs of their lingering presence, and the continuing performance of many of their Ice Age co-stars. Applaud Blue Jays today for our oak trees. Admire the Osage Orange that still grows a formidable sloth defense. And grieve for the lonely Honeylocust that still cries out every fall for the sloths to return. (photo borrowed from)

The common Honeylocust (Gleditsia triacanthos), sometimes called the “False Acacia,” is reviled despite many fine qualities including light shade, fragrant flowers and adaptability. The problem? #1: its large thorns—a serious menace to tires and bare feet, and; #2: the messy piles of long curly brown seedpods produced by the females. (photo borrowed from)

The “honey” in “honeylocust” comes from the sweet gum that surrounds the seeds while they ripen inside the pods. “Locust” is a case of mistaken identity. Colonial settlers assumed G. triacanthos was related to the Old World Carob or Locust (Ceratonia siliqua), a Mediterranean tree with similar pods (Peattie, 1991). A chocolate substitute is ground from the seeds. The tree’s nickname, “St.-John’s Bread, ”

is a biblical reference to the sweet-toothed saint who subsisted on ”locusts and wild honey“ in the desert (Matthew 3:4). Scholars believe he was eating Ceratonia seeds rather than bugs and the “locust” derives from the resemblance of the noisy insects to the rattling sound the pods make when ripe and the tree branches are shaken (Peattie, 1991). (photo borrowed from)

thorns, some over 12 inches long (The Complete Encyclopedia of Trees and Shrubs, 2003). The multi-branched spikes can cover the trunk to a height of 20+ ft.– far beyond the reach of living browsers. Defensive overkill is good sign of an ice age ghost at work and the lingering effect of genes that know mastodons and sloths are still lurking nearby (Barlow, 2000). (photo borrowed from)

G. triacanthos is an ice age orphan–seedpods don’t pile up like they do under this tree unless its regular disperser(s) are gone (Janzen and Martin, 1982).

An “aggressive colonizer” doesn’t sound like it’s suffering, but the trees’ common occurrence along river bottoms is an important clue—spring floods carry the seedpods afar but there are problems moving upstream and to high ground. For most of the Holocene, with its natural dispersers extinct, G. triacanthos was rare within its former range (Janzen 1982). It only became widely distributed again after cattle were introduced to North America. The prowess cows show in dispersing Honeylocust seeds results from evolving with very similar trees, Acacia spp., in N. Africa and the Middle East bestecasinonorge.com. Looking at Acacias and the relationships they co-evolved with large ungulates may reveal some important clues about Ice Age ecosystems and also sloths. (photo borrowed from) 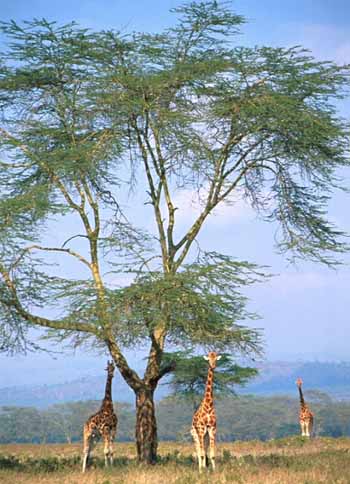 There are 128 Acacia spp. in Africa; nearly half concentrated in the Horn of Africa and the Middle East (Coe and Coe, 1987). All mount a defense of hooks or spines against browsers; some famously offer bed and board to stinging ants for reinforcement. Acacia foliage is valuable forage for herbivores throughout Africa, and in the dry season the bark is an important item in elephants’ diets. The seedpods are avidly eaten by many large ungulates. Some pods contain a sticky aromatic secretion that is it is eagerly sought by browsers. (photo borrowed from)

Some Acacia seeds are small and papery and wind-dispersed; others are large and durable and dispersed by mammals. Traditional pastoralists harvest the latter to feed livestock, using long poles to shake the pods down from the trees. The seeds rattle inside the pods and the sound attracts animals from up to 200 meters away (Coe and Coe, 1987). Mutualistic relationships have developed from the Sahara to India between arboreal mammals feeding in Acacia trees and land-bound browsers attracted to the sound and dropped pods.

Acacia seeds won’t germinate in the shade of their parents so wind or good wheels are important for dispersal (Miller and Coe, 1993). The hard seeds are well adapted to survive the shearing forces of mammal teeth and digestive acids. They need scarification to speed germination, and the more the better. Rohner and Ward (1999) found a significant correlation between mammal size and germination success.

However, the same architecture that allows the seeds to escape mammal-passage largely unscathed also leaves them vulnerable to Bruchid beetles, or “seed weevils.” The insects bore through the Acacia pods while they are still green and growing on the trees and lay their eggs on the seeds. The new generation attacks the mature seeds and can destroy up to 99% of those left on or under the trees (Southgate, 1981). (photo borrowed from)

With death by beetle infestation virtually certain, could a seed be any worse off getting eaten? Surprisingly, those seeds that go through a mammal gut have a germination rate up to 3X better than seeds that aren’t swallowed (Miller and Coe, 1993). If caught early, ingestion kills the Bruchid larvae before they kill the seed, and the tunnel the insects burrowed inside speeds water absorption and germination later on. It’s extremely beneficial for Acacias to arrange to have their seeds eaten as soon as possible after ripening, and transported far away from the site of infestation, so they evolved a dinner bell. When ripe. they start rattling, like a Flamenco dancer on caffeine, and mammals come running from all around.  And so too it worked for the Honeylocust for millennia. . . . (photo borrowed from) 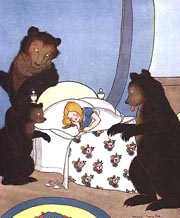 Ecologists have barely begun to decipher the many ways ice age megamammals affected North American ecosystems. Species may be orphaned in many ways–the signs are often subtle, like the call to dinner that no one hears. As we survey the woodlands we’ve inherited we should remember that the sloths haven’t been gone as long as we pretend—the porridge is still hot and their music still plays. And as the quickening pace of global climate change and related “natural” disasters indicate, we aren’t in control at all. We’ll never solve some of our conservation puzzles until we acknowledge the keystone role of the Pleistocene megamammals (photo borrowed from). . . . Dave

Southgate, B.J. 1981. Univoltine and multivoltine cycles: their significance. In The Ecology of Bruchids Attacking Legumes (Pulses). Junk, The Hague. pp.17-22.