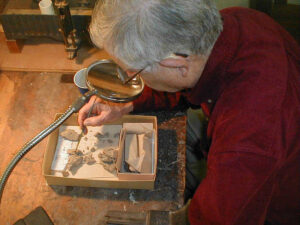 The dead of winter gives us the opportunity to catch up on our lab work.  Holmes has been exploring a sample of clay we collected two years ago near the juveniles, and he found some clams inside!  These are the first fossil mollusks we’ve seen in the clay.  Jim Theler at the University of Wisconsin–La Crosse  has identified them as members of the Sphaeriidae family which has two common genera Pisidium or pill clams and Sphaerium or fingernail clams. 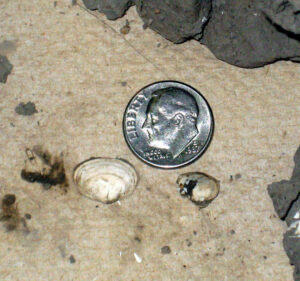 In this part of the world fingernail clams are found in all kinds of freshwater—ponds, lakes, rivers and creeks of all sizes; in silt, mud, sand and gravel. Sphaeriidae bury themselves in the bottom and don’t move around much, unlike snails, so they generally serve as good indicators of the habitat (Herrington and Taylor, 1958). Some are highly sensitive to their environment and make excellent environmental barometers of water quality and other environmental conditions (Kilgour and Mackie, 1991).  If we can identify the species that will establish  its habitat requirements and help define some specific conditions  at the site when they were alive (e.g.water chemistry, hydrology, sediments, etc.).  It’s a particularly difficult family to classify though–we’ll need a specialist.   There are more  fingernail clams in our sample—that could be useful too.  Funk and Reckendorfer (2008) report a correlation  between the shell variation within a population to the temporal and spatial variability of the environment, with stable homogenous environments showing less variability. Stay tuned, we could have a lot of fun with these!

Holmes also uncovered some large mussels—Unio sized in the sample. They are highly degraded though and very fragile.  Identifying them will also be difficult.  If we can though it will help us to further delimit the water and bottom conditions when they were alive.

There are a couple of exciting conclusions we can draw from the presence of these bivalves:  1) The clams grew here and weren’t carried in by the current. They are buried in the same silty clay we find everywhere else at the site indicating the velocity of the water was very slow—not fast enough to transport these far, even with their sail-like shapes—especially the big shells.  2) The fingernail clams are full-grow, they are not the juveniles of  fresh water mussels (naiads). They generally live 1-3 years.   Were the sloths wading through a soggy wetland or in the shallows of a lake when they met their end?   Could this area dry out every summer and the clams still survive?  How long can clams “hold their breaths?”Answers to these questions will take us a giant step toward defining another dimension of the sloths’ habitat. . . . Dave

3 thoughts on “A clam-tastic find!”