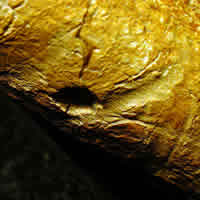 Did predators killed the sloths?  Last week Holmes and I were looking at a rib from the adult that’s currently  on display in the lobby when we noticed a large puncture and some adjacent gnaw marks. The wounds are partially obstructed by the case and easy to overlook.  They were obviously caused by  large sharp teeth and indicate a carnivore was present close to the time of death.  Carnivores don’t gnaw on bones to sharpen their teeth like rodents.  They may mouth an old dry bone they happen across, but nothing more.  If a carnivore bit into this bone, there was meat on it.

Identifying the forces that  can break and shape bones has been a concern of archaeologists for decades as intriguing assemblages of bones and bone fragments have surfaced at sites like Africa’s famous Olduvai Gorge.  The question was whether the remains indicated human hunting, and if the  bone splinters and spiral fractures were evidence of tool manufacturing.  Paleontologists like Voorhies (1969), Behrensmeyer (1975) and Hill (1976) broke many hearts showing stream transport, scavenging, weathering or trampling were responsible more often than humans.

Predators don’t always leave obvious calling cards.  Haynes reports often finding  wolf kill sites with nary a scratch on the bones (Haynes, 1980).  Behrensmeyer (1975) and Voorhies (1969) showed a pattern of survival of the ends of the major limb bones was a strong indicator of carnivore activity. Predators and scavengers normally disarticulate limbs at their proximal or ball-joint ends first, damaging the bones at predictable points of muscle attachment.  The proximal ends of the humerus and femur also have very thin walls and offer an easily accessible and delectable center of marrow.   Few carnivores will pass it up unless they are overwhelmed with meat such as at the scene of a mass-drowning or other catastrophe.  Carnivores usually ignore the distal ends of humeri and femora (i.e.  elbows and knees).  Those joints are tightly wrapped in tendons and ligaments and offer little in return, so they are more likely to survive untouched and become fossilized.  Is it just a coincidence that we have three nearly identical distal ends of humeri (2-adult, 1-toddler)?

But fingerprints at the scene don’t prove their owner caused the deaths.  Carnivores are as likely gnaw off the end of a humerus or puncture a rib stripping the flesh from the steaming carcass of a fresh kill as cold carrion. How are we to determine if our sloths spent their last moments in a terrifying struggle against a pack  of predators, or simply died a “natural” death (e.g. from disease, malnutrition, drowning, etc.), and their remains were simply scavenged post-mortem?

Gary Haynes has spent a lifetime studying predator kill sites, and the patterns he has found could add an exciting new dimension to our understanding of the sloth site.   Resources, according to Haynes,  are distributed in predictable ways in the environment and to survive  animals learn the patterns all around them and across the seasons. Predators survive by mirroring that environment, especially the behavior of their prey,  and so their behavior becomes extremely patterned too, including at the site of a kill.  The location, distribution, condition, and type of bones or bone fragments  left at a kill site–sometimes even a single bone, can be distinctive enough to distinguish predator activity from scavenging and the presence  of a particular carnivore–no punctures or gnaw-marks required!

A wealth of information about an ecosystem may be revealed, such as how many wolves, for example,  were in a pack, the season of the year when they made the kill, how hungry they were, how vulnerable their prey was . . . even their favorite NFL player.  If Ice Age predators behaved like their modern-day cousins and followed the same general ecological rules–and Haynes believes  they did–relatively undisturbed bone assemblages such as ours can reveal much about predator-prey interactions, even involving extinct species (Haynes, 1982). . . . Dave  (to be continued)

Behrensmeyer, AK. 1975.  The Taphonomy and Paleoecology of Plio-Pleistocene Vertebrate Assemblages East of Lake Randolph, Kenya, Bulletin of the Museum of Comparative Zoology 146: 473-578.