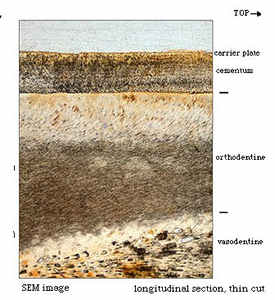 Popular opinion holds ground sloths are extinct because they were  too inept to survive.  Polite critics often point to sloth teeth as one example of their maladaptation, foregoing the customary jabs at their supposed beach bum lifestyle and grooming habits. This came to mind recently when we received some photos from Daniela Kalthoff, PhD, a researcher at the Swedish Museum of Natural History.  She’s studying the microstructure of sloth teeth and offered us some amazingly detailed images of a Megalonychid tooth to aid our research (left).

We sectioned a molar in the UI Department of Geoscience last year, and found possible growth lines.  A Micro-CT scan taken at the Iowa Institute for Biomedical Imaging showed some intriguing concentric circles that experts eventually determined were imaging artifacts and not real.  The teeth proved too dense for a scan to show much.  If we can prove the divisions are indeed annual growth lines, we might be able to measure Megalonyx growth rates and determine their ages.

People have been looking at sloth teeth since the pioneering work of Retzius (1837) and Owen (1840, 1845) and pointing out their deficiencies. Sloth teeth lack the hard enamel of other mammals, and even people who should know better have concluded they are woefully primitive and another example of sloth ineptitude.  Not too long ago one authority hypothesized excessive tooth-wear might even be responsible for the ground sloths’ extinction (Ferigolo, 1985).  Diet changes forced upon the animals early in the Holocene presumably  tipped them into oblivion (too much arugula probably).

Instead of enamel, sloth teeth are made of dentine, the material inside your teeth.  It’s arranged in concentric layers of different kinds and degrees of hardness, surrounded by cementum.  Kalthoff is studying the microstructures of each variety.  Dentine is soft and erodes rapidly.  To compensate for this, sloth teeth grow continuously throughout their lives. The inner layer is softer than the outer layer so it wears down more rapidly as sloths chew, forming a cup in adults,  with a constantly renewing sharp crest—perfect for cutting vegetation into bite-sized pieces (Naples, 1995).

Enamel became the dental material of choice in mammals because we evolved the genes to adjust its structure to different directions of stress in different teeth, or areas of a tooth, by reorienting its crystals and changing its thickness.  Enamel has a very high mineral content–92% by volume compared to just 69% for dentine, and that makes it hard and durable–tooth cusps resist wear and stay sharp (Rensberger, 1995).

The crystalline structure that gives enamel its strength, however, also makes it brittle when stressed in the wrong direction. Dentine is actually 20X stronger in its weakest direction (Ramussen et al., 1976).  Anyone who has ever bitten down on a wayward cherry pit or unpopped kernel of popcorn knows how quickly you can chip a tooth if you stress it in the wrong direction.  Sloths never had to slow down eating looking for old maids–maybe not so inept afterall.

Recommendation: If you take a sloth to the movies, make him buy his own box of popcorn. . . . Dave

Ferigolo, J. 1985. Evolutionary trends of the histological pattern in the teeth of Edentata (Xenarthra), Archives of Oral Biology: 30: 71-82.