Ground sloths were first discovered by science in 1789 when a giant skeleton was found on the banks of the Rio Luyan near Buenos Aires. Their existence didn’t surprise the local natives who had long held the animals were living underground like giant moles occasionally venturing too close to the surface and dying because of exposure to sunlight (Heuvelmans, 1995). 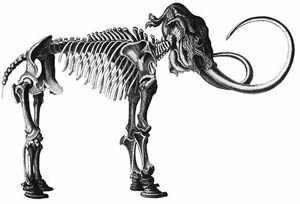 That’s the same legend Siberian natives evolved to explain the appearance of mammoth carcasses in the river banks after spring floods (Tolmachoff, 1929). I was reminded of that this week as I slopped through the muck inside a local museum looking for salvageable artifacts. Our first sloth was uncovered by the big 1993 flood, hopefully we don’t lose it to the Flood of 2008.

A 500-year flood fifteen years after a 100-year flood–either that’s really bad luck or we’re doing something wrong. The underground has always been a place of dark mysteries and strange animals, but there’s no mystery in what happens when you tile, pave over or compact 56,276 square miles of land (Iowa’s area) to drain the water as quickly as possible into the nearest river. The agony for the thousands of displaced people is clear, but the soil that’s currently making its way downstream to the Gulf won’t be as easily replaced as their ruined possessions.

George Washington Carver offered one of the most hopeful predictions for Iowa ever conceived, “ I believe the Creator has put ores and oil on this earth to give us a breathing spell. As we exhaust them, we must be prepared to fall back on the farms, which are God’s true storehouse and can never be exhausted. For we can learn to synthesize materials for every human need from the things that grow” (Blouin, 2005). When things calm down a bit and people feel a little more secure, maybe we can take a hard look at the way we manage our soil and water. That’s Iowa’s fortune washing away. Our future is a lot darker as a result–there’s no mystery about that. . . . Dave

Tolmachoff, I. 1929. The carcasses of the mammoth and rhinoceros found in the froze ground of Siberia. American Philosophical Society 23: I-74b.