The Pleistocene mass-extinction left a number of 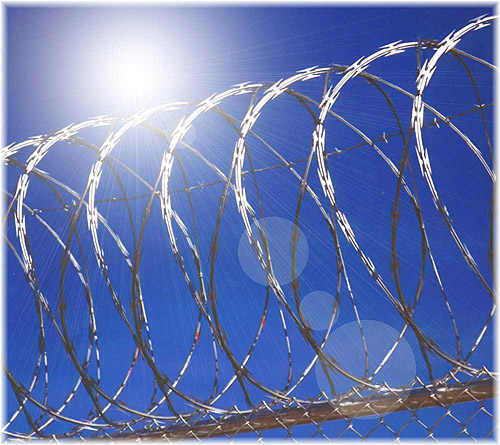 plants and animals ill-adapted to modern life—trees with fruit or seeds too large to be swallowed and transported (Janzen and Martin, 1982), with outmoded defenses (Barlow, 2000), or waiting endlessly for agents of disturbance that are no more.  They are the survivors of vanished communities, still reflecting the forces under which they evolved for hundreds of thousands of years, and often in decline today.  They are the ghosts and orphans of the Ice Age.  I have seen an ice age ghost, and it’s a nightmare!  (image borrowed from)

The Osage Orange (Maclura pomifera) is often cited as one

of North America’s more conspicuous ice age orphans for its outsized fruit (Barlow, ibid.).  About fifteen years ago I planted a small specimen and made the mistake of pruning off a couple of branches to encourage it to grow into a more open form.  I awoke a demon that had been sleeping inside for 12,000 years—its “rapid sloth-defense” genes.  The tree swiftly grew a thick barricade of stout upright, ferociously spiny branches, attempting to protect its crown—exactly what I was trying to avoid. The branches are up to 12 ft. long and straight as a fishing pole, 3/4 inches in diameter at their base, with inch-long needle-sharp thorns.  Now once a year I take my life in my hands and climb a ladder, pruning shears in hand, and try to negotiate some openness with this plant.  It’s a losing battle, and always bloody.  Its thorny stockade now stretches to the top, at least twenty feet high now–far beyond the reach of white-tailed deer.  This defense evolved with taller and tougher browsers in mind— North American camels, mastodons and sloths. 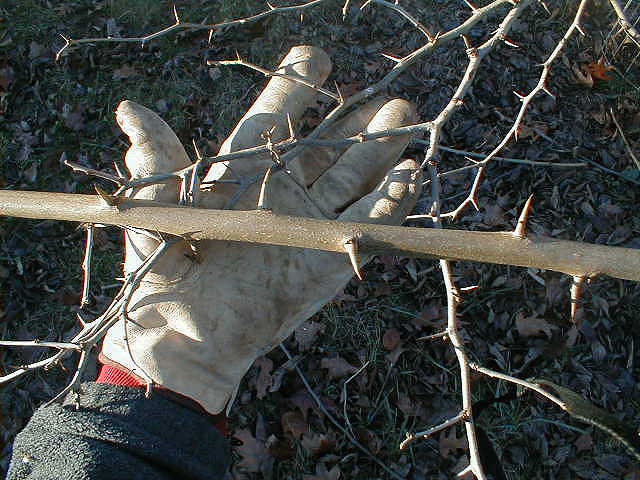 I can only imagine what the tree is thinking. . . Why won’t this stupid sloth take a hint and go away!!   My hope is that it will eventually grow tall enough and decide its apical buds are safely out of my reach and stop expending energy on this living razor-wire. Heaven help me though if it has mistaken me for an Eremotherium, North America’s biggest ground sloth.  Standing on two legs it could probably have reached at least 30 feet high.  I may be in for a long and painful battle.

Plants defend themselves from herbivores by many different means both chemical and physical.  The defenses may be constitutive, i.e. present whether herbivores are around or not, or induced, i.e. a direct response to herbivore damage.   Constitutive defenses can vary between different parts of the plant depending on the risk, and with the plant’s maturity.  Defenses are costly to a plant, diverting energy away from growth and reproduction (Gomez and Zamora, 2002).  That’s believed to be the force behind the evolution of induced defenses—save your energy until you need it.  A plant’s induced reactions are also affected by its physical condition, energy reserves, and the resources available from its environment (Bergelson and Purrington, 1996).  In theory plants should suffer a setback due to browsing but some respond with spurts of vigor, so-called overcompensation, and seem to benefit and even depend on browsing (McNaughton, 1983) (Paige and Whitman, 1987). 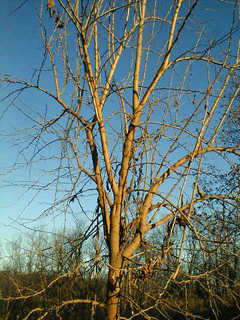 M. pomifera has evolved a complex multi-layered defense that is both chemical and mechanical; constitutive and induced.   As the tree grows naturally it arms its branches with a minor scattering of thorns, no more menacing than a rose’s. They force browsers to forage more slowly, to take smaller bites, and to spend more time manipulating leaves and shoots in their mouths in order to chew and swallow them comfortably.   As handling time increases, the net benefit to a browser of eating the plant decreases.  If the leaves are small, and especially if the foliage isn’t highly nutritious, and there are alternative food plants, many browsers limit their munching to levels the plant can live with (Cooper and Owen-Smith, 1986).

Only under severe browsing pressure (or pruning apparently) do some plants like M. pomifera call out the big guns.  The blitz of protective limbs is called adventitious branching, and the counterattack may be both physical and chemical. The prickles on Rubus species grow back longer and sharper after being browsed (Abrahamson, 1979). Browsed European holly (Ilex aquifolium) leaves grow back with extra prickles (Obeso, 1997).  Young (1987) found Acacias increased the length of their new thorns in response to browsers, but relaxed the response after their prolonged departure (Young and Okello, 1998).  Some plants use a combination of thorns and chemicals; for others, chemicals are enough.  Under severe browsing some Alaskan trees grow adventitious shoots with 2X the toxic resin concentration of their regular foliage, halting the browsing of snowshoe hares and leading to the recurring collapse of the hare population every ten years (Bryant, 1981).

An anti-herbivore defense is a compromise for a plant.  There are many different kinds of 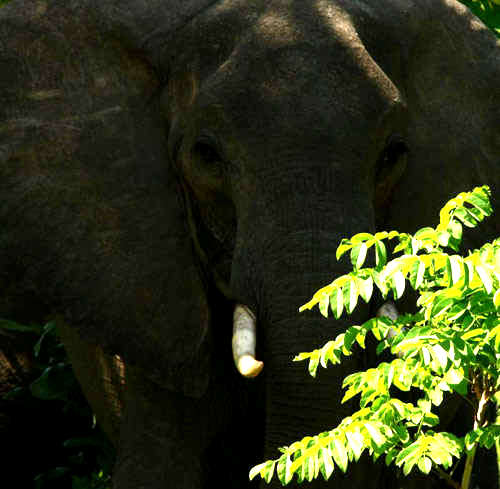 browsers in the woods with many different sizes and shapes of mouths and tongues, and levels of experience.  No defense is perfect or effective against all browsers, especially insects.  Evolution leads a plant to anticipate its risks and plan its defenses appropriately—in the case of M. pomifera, a pattern of branching and arrangement of spines, combined with a biochemical arsenal, perfected through natural selection over hundreds of thousands of years.   So don’t tell me sloths are gone. . . we’re surrounded by  evidence of their presence. My Osage Orange tree knows there’s a sloth nearby (and a darn stubborn one too!) and it’s responding in every way it knows.  If I could only read its form and chemical reactions better–listen to it better–oh the stories it could tell me about sloths. . . . Dave

Paige, K.N. and Whitman, T.G. 1987. Overcompensation in response to mammalian herbivory:  the advantage of being eaten. The American Naturalist 129: 407-416.

2 thoughts on “Voices in the forest: echos of the ice age”