McDonald (1977) was the first to note the similarity of Megalonyx teeth to those of  VAMPIRE BATS.  Like sloths, but unlike other bats and most other mammals, the common vampire bat, Desmodus rotundus, has teeth that are comprised entirely of dentin, with a jacket of cementum.   SEM analysis shows the thin layer of enamel that vampire bats have at birth wears away quickly (Freeman, 1998).  As in Megalonyx, the bats’ teeth are ever-growing.

They compensate for the rapid wear of the soft material by grinding upper teeth against lower in a systematic way to keep them sharp (Phillips and Steinberg, 1976). Ever-growing teeth are common in rodents but the biting surface in this case is a combination of dentin and enamel.  As the softer dentin erodes and the enamel precipice chips, the animals are left with a long-lasting but jagged edge.  A nice tool for cutting and slicing plants and seeds, but vampire bats depend on stealth to secure their meals. A  smooth razor blade works better than a serrated edge for shaving hair or feathers off a patch of skin and making a clean painless incision.  The cementum jacket of the bats’ teeth is about as hard as the dentin, eliminating the chipping problem where they meet. But the ugly rumors about sloths and vampire bats didn’t get started simply because of tooth morphology. The scandal-mongers cite several other lines of evidence for making this unsavory connection.

Some of the ground sloths, including Megalonyx, show a marked affinity for caves. 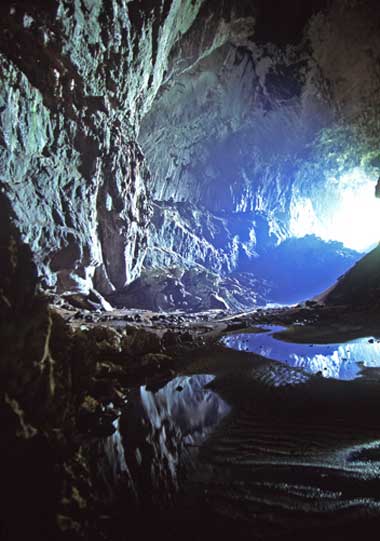 McDonald (2003) reports that 34 out of the 152 sites from which M. jeffersonii remains have been found are caves (including sinkholes, rock shelters and fissure fills).  Nothrotheriops shastensis shows an even stronger association with caves—39 out of 52 known localities.    In contrast, of the 168 late Pleistocene sites known for Paramylodon harlani, only 4 are true caves.  The largest North American sloth, Eremotherium laurillardi, is known from just 10 late Pleistocene localities and none is a true cave.   Clearly caves figure in the natural history of some sloths—whether to provide protection from predators, or shelter while sleeping or giving birth, or to help control body temperature in extremes of hot and cold, conserve water, or another reason is still TBD.  (image borrowed from)

Obviously Megalonyx survived in locales without caves or natural rock shelters of any kind.  In that case they may have simply dug burrows or settled into hollow trees (like bats).  Remarkably, several apparent sloth burrows have survived to the present day in Argentina, measuring 1.8 meters in width and up to 40 meters long (Vizcaino et al. 2001). The claw marks inside are too large to have been left by the ice age armadillos, but match up well with the morphology of both the Glossotherium and Scelidotherium ground sloths. Frenguelli (1928) recovered the skeleton of a Scelidotherium within such a burrow.

Modern tree sloths are also nocturnal like bats, but that’s an aversion to predators not daylight.  McDonald (2003) suggests Nothrotheriops may have retreated to caves more often than other ground sloths to avoid the daytime heat of its desert habitat, waiting for the cool of the night to feed. However, the continent-wide distribution of Megalonyx suggests they had no such metabolic limitations. And an adult Megalonyx likely lost little sleep worrying about predators either, and so probably stayed in bed until the sun was up like the rest of us. (image borrowed from)

The scurrilous rumors have probably been reinforced by the lurid accounts of the giant vampire bats that lived here in the Ice Ages.  The Pleistocene mammals included a diverse assortment of bats including vampires.  Many accompanied their hosts into extinction.

The fabulously named Desmodes draculae, is estimated to have been about 25-30% larger than the common vampire bat of today (Freeman, 1998).   Much still needs to be learned about the natural history of this mammal, especially its range. Blood is almost all protein, and without fat reserves vampire bats are highly sensitive to cold, raising questions about the ability of D. draculae to survive in northern climates.  Uncertainty about the diet of Megalonyx, its renowned adaptability, the blood-sucking food-niche that was probably open in the North, and the aforementioned unsettling similarity of its teeth to Desmodes spp. are presumably responsible for the irresponsible speculation that Megalonyx may have been an opportunistic sanguivore. (image borrowed from)

Megalonyx is generally believed to be a browser, of course (McDonald and Anderson, 1983), but how they ever managed to survive north of the Arctic Circle (Stock, 1942) is a wonder.   Guthrie (1980) has proposed grasses flourished there in lieu of the moss and lichens that eke out their existence there today, supporting a broad range of grazers—the so-called mammoth steppe.   It has been suggested that perhaps Megalonyx was supplementing its diet with something besides plants. Those nightmarish claws have been an enigma from the moment they were first discovered and then there are those teeth. . . and let’s be honest, this isn’t the first ground sloth cast as a possible psycho (Farino and Blanco, 1996).  One might contemplate the thought that what was nipping at the toes of mammoths wasn’t Jack Frost, but blood-sucking sloths. . . . 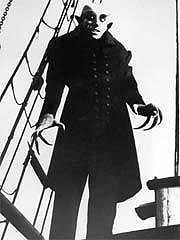 Everyone has heard the stories of course–Dracula, the Undead, etc. . . .  Myths about supernatural creatures that consume the blood of the living have come from nearly every culture on Earth since the beginning of recorded history (McNally, 1994).   Could they originate in paleolithic folklore?  Vampires in European mythology are usually described as bloated, ruddy in color and with long fingernails, as first depicted in cinema in the 1922 German silent film Nosferatu. Is the resemblance merely a coincidence or an unconscious connection to primal and well-founded fears? (image borrowed from)

Then there is the little matter of elephant garlic, Allium ameloprasum.

Garlic has been a part of folk medicine for thousands of years.  Over 800 therapeutic formulas are listed in the Codex Ebers, the Egyptian medical papyrus dating to 1550 BC (Nguansangiam et al., 2003).  Data on elephant garlic, a leek actually, is less complete but it has been shown to have some of the same effects as true garlic (Morita et al., 1988), including presumably its legendary ability to ward off vampires. Personally, I don’t think I’m going to lose any sleep worrying about vampire sloths walking at night with the Undead.  But I still have one nagging question. . . so if there weren’t any vampires, what were the elephants doing with the garlic?  (image borrowed from)     Happy Halloween. . . Dave

Guthrie, RD. 1990. Frozen Fauna of the Mammoth Steppe:  The story of Blue Babe. The University of Chicago Press.

McDonald, HG. 1977. Description of the osteology of the extinxt gravigrade Edentate Megalonyx with observations on its ontongeny, phylogeny and functional anatomy. Masters thesis, University of Florida.

Phillips, CJ and Steinberg, B. 1976. Histological and scanning electron microscope studies of tooth structure and thegosis in the common vampire bat, Desmodus rotundus.  Occasional Papers of the Museum of Texas Tech University 42:  1-12.

7 thoughts on “The little matter of elephant garlic”