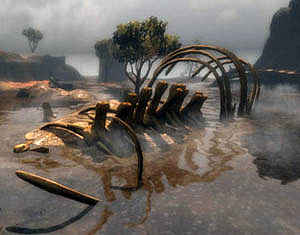 Shipman (1981) states that only 1% of the terrestrial animals that die are preserved. This average however disguises the heavy bias in the fossil record in favor of species from lowland habitats (ponds, marshes, floodplains, etc.) where sediments accumulate and provide a protective blanket for the remains.  Rapid burial is a critical factor improving the probability of preservation.  Burial reduces physical weathering and reduces the opportunity for scavengers to damage and scatter the bones. Also, the more rapidly a specimen is covered, the poorer the environment for some destructive microbes.  Most of the Earth’s continental surface is upland, but the preservation environment here is relatively poor.

Most of what we know about upland residents, like Megalonyx, comes from their lowland visits.  The probability of their preservation is directly correlated to the frequency and duration of their lowland sojourns. Some animals visit daily to drink. Others are only present seasonally (e.g. maternity herds) or annually (during migration). We should ask what brought our sloths to water.  When we find the fossils of an upland animal here we often wind up interpreting the environment in which the animal died, not the environment in which it lived. We will certainly learn a lot about where the sloths died . . . the challenge will be figuring out how they lived.