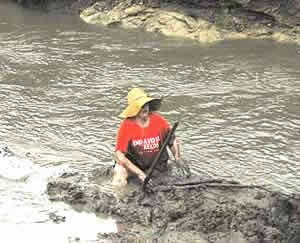 Heaven knows we’ve almost lost some students and one Bobcat operator to the muck at the site, but how reasonable is it to think a giant sloth could die that way? How about three sloths? Haynes (1988) has studied hundreds of elephant deaths and reports it’s actually not an uncommon event. Healthy adult elephants never have a problem even in the deepest thickest mud but very young animals and those who are ill or weak some times get stuck.  He has also observed impala, Cape buffalo and black rhinos dying in this manner. 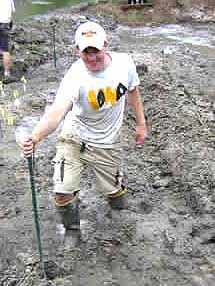 So death by mud isn’t out of the question (Meghann take note). But trapped animals leave some evidence behind after they are dead. We would expect to find foot and leg bones locked in the sediments, articulated in a vertical or standing position. We haven’t found anything like that.  Of course, the sediment could have become saturated with water again and then been disturbed by trampling and other activities at the water hole. But that’s a lot of churning and the toddler, at least what we have found, is fairly localized. A current strong enough to stir up the muck and clear it away would have moved a lot of bone too and left heavy sediment behind.  No, all the evidence says little or no current. . . . Dave