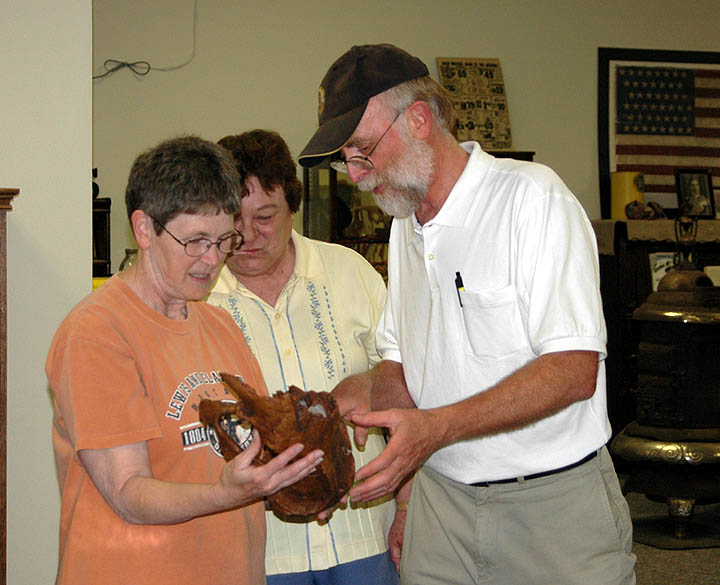 About 300 people came to see the toddler skeleton and  other special exhibits at the Open House  in the Greater Shenandoah Historical Society May 29-30.

Thanks to Harold Decuir, President of the Board of Directors, Sallie Brownlee, Museum Director, and the rest of the museum board and volunteers for hosting  us. 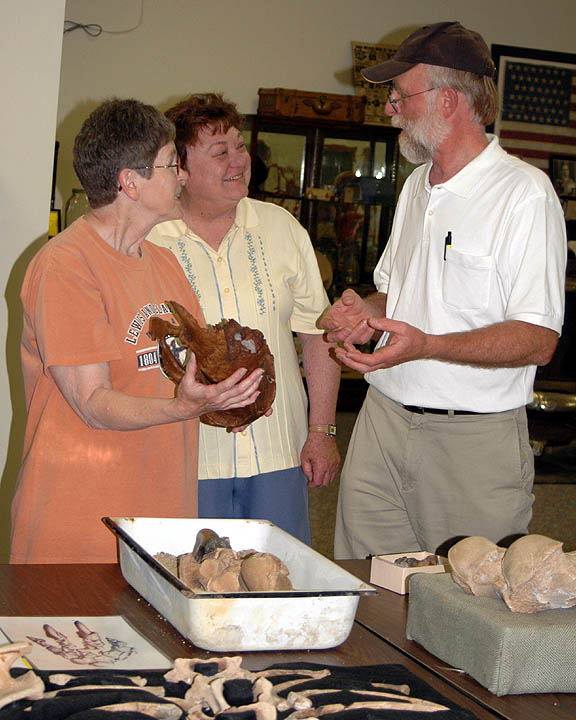 We had a mishap downloading the camera, but Tess Gruber-Nelson, Staff Writer at the Vally News/Essex Independent rescued us with these photos.

Tess also provided the story below:

The three giant sloths unearthed in the West Tarkio Creekbed near Northboro got to come home for a visit over the weekend.

The University of Iowa Museum of Natural History brought the sloths to the Greater Shenandoah Historical Society Friday and Saturday in order to show the public what has been found in their backyards over the past three years. 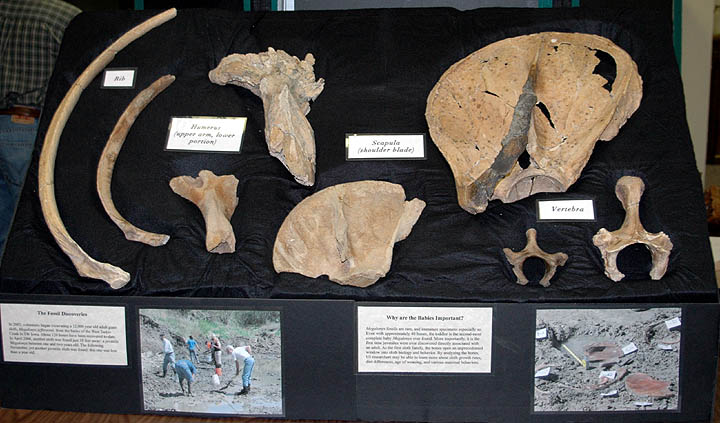 In addition, a bone from a Paramylodon sloth, also found at the site, was brought.

Brenzel said the bone was found by landowner Bob Athen a couple years ago and was placed in a sloth toe bone drawer until it was recently inspected by Greg McDonald, whom Brenzel described as the No. 1 sloth expert in the world.

“His (McDonald) face just lit up when he saw it,” said Brenzel. “This is a big deal. This is the first record of this (Paramylodon sloth) found in Iowa.”

Both the Paramylodon and Megalonyx were elephant-sized Ice Age mammals that became extinct about 12,000 years ago explained Brenzel.

However, Paramylodon sloths were outfitted with broader, triangular claws for digging rather than the sharp claws of the Megalonyx, which were used for seizing at woody vegetation such as tree branches.

“They are different genus and different species living in a slightly different habitat at the same time,” said Brenzel. “We’re finding these bones where they lived.”

Finding bones of the Megalonyx and Paramylodon helps researchers answer questions about how these animals lived, where they lived, what the landscape was like and how they died.

“There’s a whole ecosystem we’re starting to put together here that nobody in the world has ever been able to do this before because nobody has found a site to where these guys were living.”

Besides the actual bones of the sloths, UI Museum of Natural History researchers also brought along samples of the technology available to them through the University, such as one of the most sophisticated CT scanners in the country.

Researchers can take a bone from the sloth and scan it using the CT scanner. The feed from the scan is then sent to a mechanical engineering student in order to convert the file for rapid prototyping at the College of Engineering, who in turn can have a replica of the bone, both inside and out, made.

“We wanted to make the (Historical) Society aware of the capabilities we have,” said Brenzel. “They need to dream big. They don’t have to settle for poster-boards. They could do a life-sized model of the sloths.”

Brenzel added the University is willing to assist the museum in any way possible.

“We’re missing the boat if we don’t capitalize on this,” said Greater Shenandoah Society President Harold Decuir. “There’s plenty of room at the museum for a sloth display.”

The problem, Decuir said, is how to get the ball rolling for such a big undertaking.

“I honestly don’t know right now,” said Decuir. “I do know we need to find a way to connect with the young people in this community; get them interested in the museum.”

This was the first public display of (all of) the Tarkio Valley Sloths. Brenzel and Decuir both said they were pleased with the number in attendance.

Thanks also to University of Iowa Museum of Natural History staff-members Sarah Horgen and Meghann Mahoney, and museum volunteer Aaron Last for their stellar support with the event . . . Dave