Walking on campus last month I spotted an acquaintance I had long overlooked—a Kentucky Coffee tree, Gymnocladus dioicus. It’s small and easy to miss most of the year, but one characteristic stood out—the ear-sized seedpods that had clung to its branches well into the  Spring. Early American caffeine addicts ground up its large seeds to make a coffee substitute.

If they got a buzz it wasn’t from caffeine–a novel amino acid makes up 5% of the seed contents (dry weight), probably toxic to the Bruchid beetles that plague most other Leguminosae (Janzen, 1969), but a welcome winter snack  for a hungry mastodon or ground sloth. G. dioicus shows all indications of being an ice age orphan–left hanging by its normal dispersers (Barlow, 2000). Native Americans may have saved the tree from extinction by spreading the seeds for food or perhaps to use for recreation  (Van der Linden and Farrar, 1984). (tree photo borrowed from)

Janzen and Martin (1982) cite large wasting fruit and seeds as indications a plant may be a victim of the ice age extinctions. On that basis the Honey Locust, Osage Orange, Persimmon and Pawpaw are most often cited as other orphans (Barlow, 2000). I wonder though if this list doesn’t significantly understate the impact of the mass-extinction on plants. “Large” and “wasting” are nebulous measures, and little is  known for sure about the fate of seeds after they leave home. (seed photo borrowed from)

However transported, and some compelling models not withstanding, few researchers have ever had the wherewithal to track an actual seed shadow. Forgotten rotting fruit may be the least of the waste.

An oak, for example,  need only see one acorn mature among the millions it produces over a lifetime to be deemed a success. The thousands eaten by squirrels and blue jays annually may be the necessary “payment in offspring” owed to dispersers for their service (Janzen, 1985), but the 90%+  lost annually to pathogens, insects and seed predators (Janzen, 1969), or simply misplaced, is a huge waste! (oak photo by Richard Packwood,  borrowed from)

Evolution is a sloppy business, and forces of selection assail a plant from all directions. Fruit characteristics are a compromise between defense and attraction.  Perfectly choreographed plant-disperser relationships are rare, and what passes for the dance of coevolution is usually just an animal doing an opportune solo and “fitting” in (Janzen, 1969) using a suite of morphological features and behaviors evolved eons earlier in a different habitat, and in the case of sloths, a different continent.  For G. dioicus, Megalonyx was simply “next” in a long line of big movers, possibly stretching back to dinosaurs.

Plants generally don’t do much adapting to the dispersers they are dealt. Like in high school, there’s strong pressure from the surrounding community to look and act like everyone else–in this case a fruit.  Invasive species wouldn’t be the problem they are if evolution put a premium on dispersee individuality.   Fossils show the basic characteristics of many fruits have persisted over very long periods of time.

The arils of Taxus, for example, are virtually indistinguishable today from those of Palaeotaxus 175 million years ago (Herrera, 1986). Flowering plant species show up in the fossil record an average of 27-38 million years, while birds and mammals last for just 0.5-4.0 million years (Herrera, 1985a). Disappearing dispersers, i.e. orphaning, is a recurring event in the evolutionary lives of plants. “Smart” trees don’t put all their eggs in one basket and coevolve with just a single disperser unless they run out of options, as on an island. (Taxus photo borrowed from)

Like “waste,” size is relative too, and a poor measure of disperser compatibility.

I’ve always been struck by the dependence of Yellowstone grizzly bears on White-bark Pine seeds (Pinus alibicaulis) (Kendall, 1983). Howsoever small, pine nuts pack a wallop of nutrition, offsetting the bears’ high handling costs.   Grizzlies eat various small fruit throughout their range, and travel some distance to get it (Willson, 1993). Size isn’t a constraint so long as a fruit returns the investment . (Bear photo borrowed from)

The individual fruits of many woody plants are small and seem adapted for the exclusive dispersal of birds and small mammals, but they often grow in compact bundles of multiple “berries.”  Frequently the bundles or infructescences are located on the ends of branches. This presentation may have evolved to compete better for the attention of passing birds, 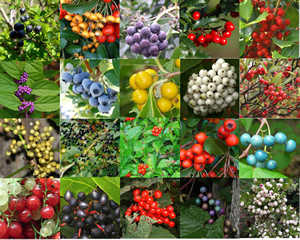 or to swamp insect pests (Sallabanks and Courtney, 1992); it may make the fruit harder for small rodents to steal (Denslow and Moermond, 1982), or enhance pollination chances (Schoen and Dubec, 1990); it may just be the most efficient structure for the plant (ibid.), but it also certainly reduces the handling costs of large mammals. No need to seach far and wide for large fruit when plenty of prepackaged small fruit is readily available.

There’s little allure however in an infructescence whose individual berries don’t ripen simultaneously, forcing foragers to waste time picking over bundles looking for ripe fruit.  Not coincidentally, synchronous ripening is characteristic of most of North America’s fruiting plants, especially in the fall when demand is greatest (Thompson and Willson, 1979).  Bundling easily accessible mouthfuls of fruit is a wise risk-hedge for a plant living in an uncertain world where dispersers both big and small drop out regularly.

Given the opportunity, many mammals include fruit in their diets, and most that do are legitimate dispersers on occasion (Sallabanks and Courtney, 1992).  So does it matter that North America’s small-fruited trees and shrubs lost their largest potential dispersers 12,000 years ago?  . . . There are still plenty of birds around.  Are plants suffering for lack of super-sized transport service?  Is there any reason to believe Megalonyx played any significant role in the process?

Fleshy fruit and dedicated fruit-eaters are relatively uncommon in North America today compared to the diversity of the neotropics (Howe, 1986).  Explanations usually include the constraints of winter and the plants’ habitat requirements.  Many are fugitive species, dependent on forest edges and clearings, a tree-fall or fire to open a gap for them to become established, and declining when the late-successioners reassert their dominance (Herrera, 1985b).  However, our deficit may simply be the fallout from an impoverished forest disturbance regime crippled by the extinction of the ice age megaherbivores.  (elephant photo borrowed from)

“It matters who defecates what where” (Janzen, 1986), most particularly because of what else they are doing at the time.    Whether Megalonyx served as a disperser or not, the  megaherbivores played keystone roles in the disturbance regime of Ice Age woodlands, creating the openings  fruiting plants need in particular.  If the surviving fruiting species aren’t dispersal orphans, many are certainly disturbance orphans. . . . Dave

Herrera, C. M. 1985a. Determinants of plant-animal coevolution: the case of mutualistic dispersal of seeds by vertebrates. Oikos 44: 132-141.

Kendall, K. C. 1983. Use of pine nuts by grizzly and black bears in the Yellowstone area. International Conference on Bear Research and Management 5: 166-173.

4 thoughts on “Movers and shakers”