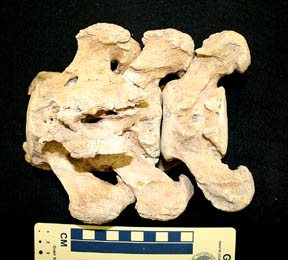 two adjacent vertebrae fused as the wound healed making movement in the joint impossible.   Did  another animal step on it accidentally? Was it wounded by a predator?  Injured in a fight with another sloth?  There’s no way of knowing.   If sloths used their tails like the third leg of a stool, i.e. to lean back on when they stood up, as some scientists suggest, our sloth was probably in pain every time she did.  Ground sloths used their tails in different ways–in Peru they flapped them while they swam grazing on seaweed on the bottom of the ocean. (Muizon and McDonald, 1995)

When giant sloths were first discovered some scientists pointed to their powerful tails as evidence they had probably lived in very large trees and used them to hang from branches like monkeys. (Lund, 1838) Owen debunked this by pointing out the natural curve in the way the caudal vertebrae articulate–down and back, not up and forward as a prehensile tail must.  He noted too the size and direction of the vertical spines and transverse processes, and other anatomical features indicating ground sloths’ tails were fully as long and as powerful as their legs–even kangaroos don’t have tails as thick and strong in proportion to their length. (Owen, 1842)

This perspective of sloth tails as third legs was inspirational.  When the first dinosaur was discovered in America

in 1858, Joseph Leidy, a professor of anatomy at the University of Pennsylvania, named the reptile Hadrosaurus, and suggested it probably browsed upright like a sloth based on the disproportionate size of its legs and tail vs. its fore-limbs.  This was a striking contrast to the clumsy iguana-like postures British scientists had given dinosaurs four years earlier when they made their initial public appearance in the life-size models constructed for the Crystal Palace Park exhibition.  It’s a perspective that inspires dinosaur researchers still today. (Borsuk-Bialynicka, 1977)

Glyptodon research hints at another intriguing possibility for the tail.  Like

ground sloths, these large heavily armored South American cousins of the armadillo are herbivorous and became extinct at the end of the ice ages.  The largest measured ten feet long and weighed  more than two tons (i.e. sloth range). (Fariña, 1995)  Calculations show glyptodons could support their entire weight on one leg–that is, like ground sloths, they could walk bipedally. (ibid.)  Fariña has also found other indicators of surprising Glyoptodon athleticism.  He believes bipedalism was a necessity for breeding, and perhaps also handy for fighting or defense. Healed fractures are common in their carapaces and have been attributed to

intraspecific fights (Ferigolo, 1992).  Fariña suggests a quick pivot on one leg and a sweep of their hind ends could turn glyptodons’ heavy armored tails into lethal weapons, somewhat like the behavior proposed for Stegosaurus and Ankylosaurus.

Could sloths have wielded their tails in a similar fashion to whack enemies?  As appealing as the image of Ninja sloths with tails of steel may be,  Greg McDonald tells me not to get my hopes up.  He hasn’t seen a similar wound in any other Megalonyx (pers. comm.), which probably means they aren’t practicing tail sweeps or similar WWF-style moves on each other or predators.  Moreover, their bone morphology suggests very limited athleticism.

Sloth bones are solid—not like tree limbs, but filled 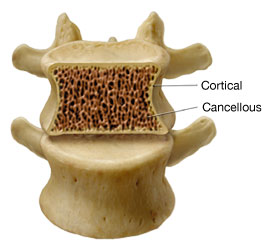 with a network of spars and braces called cancellous bone, more so than any other living animal. (De Toledo, 1996) It’s a design for resisting compressive force, i.e. weight. The long bones of most animals are hollow—an optimal design to counter the stress of bending and acceleration. Sloths, like elephants, walked stress-free, with straight legs–an ambling even gait with short even strides and minimum acceleration.   Elephants don’t gallop, but they still manage to cover a lot of ground

walking quickly, when they want . . . sloths too . . . when they wanted.   But there may be a lot more to the cancellous structure of sloth bones.

Osteoporosis researchers tell us the arrangement of spaces and buttresses inside bones makes a big difference in how loads and stresses are transmitted.  (Oxnard, 1990) What looks to be a random pattern may not be at all.   CT scans, high-speed computers and advanced mathematics may one day reveal the exact forces that produce the bony arrangement

. . .  until then all we can do is speculate, and again elephants offer some intriguing possibilities.

Lund, P. W.  1838.  View of the Fauna of Brazil, prior to the Last Geological Revolution. Kjöbenhavn.

Owen, R. 1842.  Description of the Skeleton of an Extinct Giant Sloth, Mylodon robustus, Owen:  with observations on the osteology, natural affinities, and probable habits of the Megatheroid quadrupeds in general. John Van Voorst, Publ.  London.