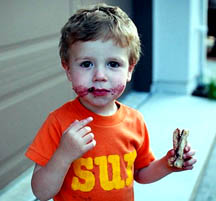 We received an urgent inquiry from Andy last week asking if we had used shellac on the ankle bone that we sent him. . . he was having problems dissolving the sample.  Standard procedure after cleaning and grinding up the bone  is soaking the fragments in ethylene diamine tetra acetic acid (EDTA) which dissolves the calcium and frees the DNA inside.   We assured Andy we hadn’t used shellac or anything else, anticipating his tests and not wanting to introduce a  foreign chemical that could interfere.   We suggested the mystery coating might be one of the most impregnable known to man—greasy fingerprints and peanut butter and jelly.  The bone is sturdy and it has been handled by at least 50,000 children!   He went back and remixed his solutions. From the email we received at the end of the week, it looks like we’re moving forward again:

I’m trying the calcium digestion again this coming week. I’m   concerned something might have been off. Sorry to keep you waiting, this stuff can get complicated. In addition, I need to run a + control sample to test that everything did in fact work.   I was reluctant at first, as these extractions have to be done in a clean room and you can’t use modern samples. I do however have some very good (ancient) Acratocnus ye bone that has yielded nuclear and mitochondrial  DNA in the past.  I will use this as a control. I’m going to set this up on Sunday.
In addition, I would like to send some of the bone powder to Beth Shapiro at Penn State. She’s one of the best ancient DNA scientists in the US.  It is standard practice in aDNA to have another lab do corroborative extractions and PCRs. If neither lab can get anything, then I’m fraid we must call that aspect of the project a bust.
This is getting my full attention. I want this to work as much as you guys!
Best,
AC

Acratocnus Ye was discovered in a sinkhole in Haiti in 1984, and subsequently at several other sites in the country.  “Ye,” pronounced “yeh,” is a Hatian Creole word meaning  “yesterday,” hence the common name: Yesterday’s Acratocnus. (MacPhee et al., 2000)  Radiocarbon dates show the Megalonychid sloths survived in Haiti until about 4,500 years ago when humans arrived on the island. (Steadman et al., 2005)

If Beth and Andy get DNA from the Acratocnus ye sample and fail with ours we can assume there’s probably no DNA in the ankle bone, but that doesn’t necessarily mean things are hopeless.  Conditions vary tremendously around the site and DNA preservation may have been favored in a different location.  We may have to explore trying some inexpensive bone screening tests to identify candidates for further analysis.

When you are doing a destructive test on an irreplaceable sample it’s comforting  to know  you have people like the staff at the McMaster Ancient DNA Centre  and the  Ancient DNA Lab at Penn State who are checking every step 3X before they proceed. . . . Dave